Shortly after the legendary Juilliard School violin professor died in 2002, pupils and colleagues paid tribute to her teaching magic 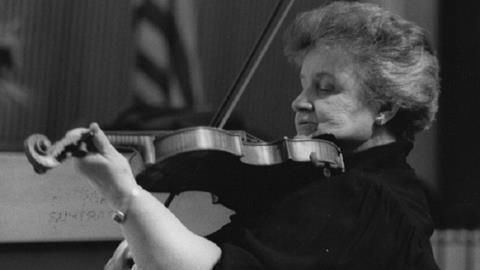 The Juilliard School dean and longtime violin faculty member, who died in 2014

You wouldn't believe how long it took for me to be able to call her Dottie after she declared that we were now colleagues. It was 1971 in Aspen. Almost 20 years earlier I had begun to study with Miss DeLay, when I was 13. She had kept in touch with me ever since. That spring of '71 I had been hired as concertmaster of the Aspen Chamber Symphony, and several weeks later the Aspen Music School announced that Miss DeLay would join the violin faculty there. She and I would be in the same place for the entire summer; we were both beginners there and she thought we might be able to help each other. My processing of the transition from teacher and mother to colleague was not easy. However, I started calling her Dottie long before she stopped calling me Stevie!

In the service of motivating her students, Miss DeLay was a lifelong investigator of human nature. At the end of my graduate study at Juilliard I served as her teaching assistant for two years. Her students became the subjects of strategy sessions. We talked about motivation, mothers, lifestyles, habits of personal organisation and self-discipline. In retrospect, I am aware that those conversations about other students frequently touched on aspects of my own development, graciously camouflaging information that would be useful for me as well as for the student.

Although Miss DeLay is best known for her most successful students, she didn't limit her attentions to the talented ones. She accepted some of us who had more problems than talent. She was worried about those who exhibited low self-esteem; she worked to remedy abusive home situations and to find financial support for students who had nothing. She spent much lesson time talking about life, as well as hearing our musical preparation. Her compassionate nature and initiative changed lives.

Books and articles about Miss DeLay state that she did not use the same method of teaching for all her students. This is true. The admonition I remember best was to strive for a large, beautiful tone. She had solutions to technical problems but was far from relentless week after week when evaluating my improvement or lack of it. As her assistant I remember working with a pre-college child whose left-hand position looked wrong. I asked Miss DeLay why she allowed that student to continue using such a flawed hand shape. She drew in her breath, looked at me with a twinkle and a smile and said: 'When it's important to her, she will fix it.' She was right, of course. That person has had a successful performing career for decades.

Once a student of Miss DeLay, always a student. Alumni came back for check-ups, or to run a concerto or recital programme. She was tireless in efforts to secure performances, to arrange auditions with conductors and to attend concerts all over the world played by her students. She taught well past midnight too many years to count Her gracious nature reached out to us long after our student days. She cared about our partners and remembered the names of our children and the activities they enjoyed.

On one level, I never adjusted our relationship from student and teacher to that of colleagues, because I was never able to call her anything other than Miss DeLay. The other reason was that whenever I performed and she was there, I was always interested in her opinion as to how my playing was going. That was something I cherished. There was never a time when I played and I would not think of her as my teacher. So the relationship of colleagues was parallel to the one of pupil and teacher - it did not replace it.

The way that I teach stems so much from her style of teaching that when we taught together it was a wonderful experience. Her philosophy was an incredibly new one when she first started teaching: the philosophy of nurturing the student as opposed to hitting them over the head with stuff that's good for them. That stayed throughout her teaching career, and that's where I got my own ideas about teaching. So when we taught together we were both totally on the same line.

I don't know if I taught her anything, but I think she enjoyed seeing how my mind worked. Her mind worked on a certain level, while mine worked on an additional plane as a performing violinist, and there are certain bowings or fingerings which may work better when you play under pressure than purely logical fingerings. She was always interested in how other people teach.

Although we didn't have many disagreements, she strongly believed that she could teach anything, while I felt that I could teach almost anything - that there is sometimes a talent that you cannot teach. But she would say, 'Sugarplum, you know I can really do it; if I say it in the right way I can really do it.' So she was I suppose less cynical and more enthusiastic about pure teaching than I was.

The incredible thing was that she always wanted to learn. She was always thinking about new ideas, new ways of teaching. And the minute there were slight disagreements she really welcomed them because then she could argue and start to think about things. She was never stale when it came to teaching.

Violin professor at the Butler School of Music, University of Texas and artistic director of The Juilliard School's Starling-DeLay Symposium on Violin Studies

One clear remembrance is of a lesson at Aspen. I was restudying Bach's E major Partita for solo violin and has many questions. What should I bring out in the music? How should I decide on the structure of the dynamics? What was important to communicate? 'Good questions, sugarplum,' she said as she peered at me thoughtfully over the top of her glasses. As was often the case, my lesson was at the end of her teaching day. After I performed the work and we talked about its various technical aspects, Miss DeLay asked me to go for a ride with her. We climbed into her car and drove up Red Mountain to a field full of flowers of many shades of red, yellow and white. We sat there in silence, looking at the beauty before us. Then she turned to me.

'Aren't all the varieties of colour beautiful?' she asked. 'Which ones are your favourite?' I replied that I liked the white daisies the best. She had me get out of the car to examine and describe my choice of flower. I described to her the texture of the stem, the smallish leaves on the stalk and the many white petals that surrounded a yellow cushion in the centre of the flower. Some stalks had multiple blooms. When I climbed back into the car, Miss DeLay said: 'Each flower individually unfolds its beauty, and together they create a wonderful vision.' As a warm summer breeze swirled around us, we had a lengthy discussion about patterns in Bach and how each one is important, but part of a larger idea. 'The phrases of Bach should unfold like a blossoming flower,' she said. We then took out my copy of the sonatas and partitas and numbered each pattern to see the architecture that may have been in Bach's mind.

Miss Delay told me to go home and look at these rhythmic patterns and think about their direction and meaning. Did they lead to the beginnings of a new phrase? Did the beginning of each one move up bu a third? How often did the pattern repeat? Was there an extension to the pattern at the end of the phrase? The next day she had me assign dynamic markings to each pattern. She explored with me the many traditional possibilities of Baroque dynamic patterns, as well as a few that could be considered unorthodox. But all the while she was having me make decisions. I was not told how to do it.  Rather, I was being nurtured in the ability to make an informed decision. Miss DeLay was giving me the tools necessary to approach any piece of music and to find what I felt was important in it.

Miss DeLay taught me that the heart of music-making is a matter of personal perception and the discovery of that perception. Through her exacting and and empowering teaching, I found my artistic voice. Not a day goes by that I do not think about her advice and counsel.

These recollections were first published as part of a larger tribute to Dorothy DeLay in The Strad’s September 2002 issue.