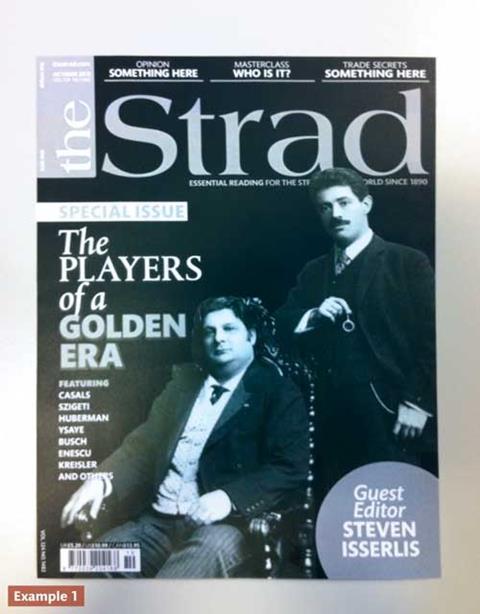 Cover lines
The cover lines and position of the text is just as important as the cover image. The following elements had to be included: headline; guest editor Steven Isserlis; standfirst consisting of a brief description of the headline story; a list of contributors; and a special edition stamp. It was important that each text element stood out, and also allowed the eye to travel freely around the page. The size, weight and position of typography helped to create this.

One of the major problems I was faced with was getting the text to stand out from the black-and-white image behind it. Subtle shadows behind the type and boxing out various elements of text helped give it prominence. Varying the typography broke down the key important words in the headline ‘Great players’ and ‘of the past’. I experimented with the positioning of text, which is aligned to the left at the bottom of the page in Example 4 (a and b), and centred along the middle of the page in Example 3.

The cover line for our guest editor Steven Isserlis was the next eye-catching point. This had to look different. I experimented with incorporating ‘guest editor’ and ‘special edition’ in place of the three cover lines across the top of The Strad logo (Example 3), but in this position they didn’t stand out and could easily be missed. The words had to stand out somehow, and I had to create a device that would separate itself from the norm. The diamond shape allowed this. I tried a circular device shown in Example 1, but it didn’t have that edge I needed – it might have come across as a sticker, and could be seen as an afterthought. The diamond shape gave the cover a dynamic feel. The solid, full-colour block draws the reader’s attention and is incorporated within the design. The position of the diamond device was important, too. It depended on where the headline, standfirst and contributors’ names were positioned on the page. I tried some alternatives (see Examples 2 and 4), with the diamond element on the right and along the bottom. The former wasn’t successful, as the diamond looked as though it was floating and needed something to anchor it, whereas the latter looked comfortable at the bottom, as the diamond didn’t cover any important details on the image behind. Having the diamond at the bottom also separated out the elements from each other.

‘Special edition’ is the text that sums up the whole cover. The positioning and size of this text did not necessarily need to be big or dominant over all other headlines, though. As can be seen in Example 3, I tried ‘special edition’ across the top of The Strad logo but it failed to stand out. It looked more comfortable with ‘special edition’ above the headline (Example 5). The serif italic font is not intrusive in size and allows the ‘special edition’ to stand alone without it being confusingly read on as part of the headline.

Colour
Colour plays an important part in the design, bringing the elements alive and highlighting text and images. Because the images were black and white, it was vital to get some colour on to the cover, but it needed to be applied accurately. There is a tendency to add a mixture of colour pallets or to over-highlight. This could begin to look fake and distract the eye. I wanted to limit myself to two to three colours for reasons of simplicity and clarity. I wanted the background to be in one colour and the cover lines in another. Example 2 shows a grey-gradient-coloured background with red text as a dominant colour. Although the background was in our usual gradient style, it left the cover looking flat and the figures ghostly. The red brought out the text and added colour to the cover, but because red is quite a safe colour and doesn’t push boundaries, I tried alternatives. Darkening the background to black gave a classic feel and balanced the lighting of the black-and-white figures on the cover. Examples 4a and 4b show the experimentation of silver and gold colours. The two striking colours make the text stand out and also complement the images. It came down to a decision between silver and gold. Gold gave a grand feeling and implied the golden age, but as Steven Isserlis writes in his ‘Welcome’ message on page 5 of the magazine, he didn’t want to confuse a golden age with the first half of the 20th century:

‘Whether or not the players featured represented a true “golden age” is hard to say, since it is impossible to judge how players before them – Corelli, Boccherini, Popper, Paganini, Wieniawski, Joachim in his prime, and so on – sounded. I feel very strongly, however, that the first half of the 20th century was an era in which musicians in general had (and were encouraged to have) a broader, more holistic approach to music than is customary today.’

Silver was equally striking and complemented the black-and-white images. It was a first for The Strad. The use of silver enhanced the classic feel of the cover.

Example 5 is our final October cover, and it’s a tribute to eleven great players of the past. Although I was not able to create a sense of real interaction between the players, their individual photographs with their unique poses and facial expressions set them apart from each other. With the careful positioning of text and variations in typography, and with the black, white and silver colours, everything comes together to reflect on a classic era in string playing.

Read more about the October issue here, or click here to find out how to download your copy as part of a 30-day free trial. Subscribe to The Strad here