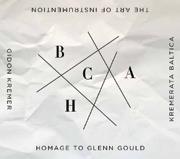 Coinciding with the 80th anniversary of Glenn Gould’s birth in the autumn of 2012, this ‘homage’ is a collection of eleven works, mostly arrangements specially made for Kremerata Baltica of Bach pieces that featured in the discography of the Canadian pianist. It’s an album that clearly reflects Gidon Kremer’s musical roots as well as his individual musical curiosity – the arrangers are mostly Russian, Ukrainian, Georgian and Latvian, among them Valentin Silvestrov and Giya Kancheli – but one that would also seem more a homage to Bach than to Gould.

For some, these pieces may steer a frustrating course between straight arrangements and brand-new Bach-inspired compositions. Kremer and his players don’t get much chance to show off their technical skills: the only track that allows them this is Stevan Kovacs Tickmayer’s After Gould, which interrupts a handful of Goldberg Variations with rude interjections from Schoenberg. Here Kremerata Baltica shows a collective force as well as fleet-footed contrapuntalism.

What does emerge is an interconnected Bachian sequence, spiked with 20th-century colourings (the vibraphone, for example, is often present). And it’s hard not to be touched by the ghostly emergence of Gould himself in the last item, Victor Kissine’s version of the Aria from the Goldberg Variations, as Kremer gently duets with a recording of the pianist. The close but spacious sound complements the meditative mood.