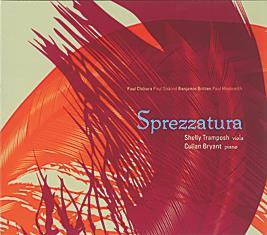 A term taken from Renaissance Italy’s courtly etiquette, sprezzatura is the art of making whatever you do appear easy. I don’t know just how easy Shelly Tramposh and Cullan Bryant find the music included here, but to my mind, everything sounds exactly right. Paul Chihara’s Sonata should prove popular with players looking for a recently written piece that doesn’t sound like ‘contemporary music’. Echoes of Hindemith’s op.11 no.4 in the first movement, and of Mozart’s Minuet from K304 in the second, precede a joyful finale.

Composed for the present performers, Paul Siskind’s Etwas für Bratsche (etwas rasch!) – ‘Something for viola (somewhat fast!)’ – is an effective recital piece in a traditional language, very well written for the viola. These interpreters need not fear comparison with any of their predecessors, either in this new repertoire or in the Britten and Hindemith classics. The variations in Britten’s Lachrymae are nicely characterised. The waltz is given a sweet lilt, but the ponticello passage immediately afterwards could have been deliberately coarser. The double harmonics sound really eerie, and the coda is given an appropriately viol-like sound.

Hindemith’s last piano-accompanied Viola Sonata, arguably the least immediately accessible of the three he wrote, sounds almost Classical in Tramposh’s and Bryant’s hands. The CD has been beautifully recorded and produced.