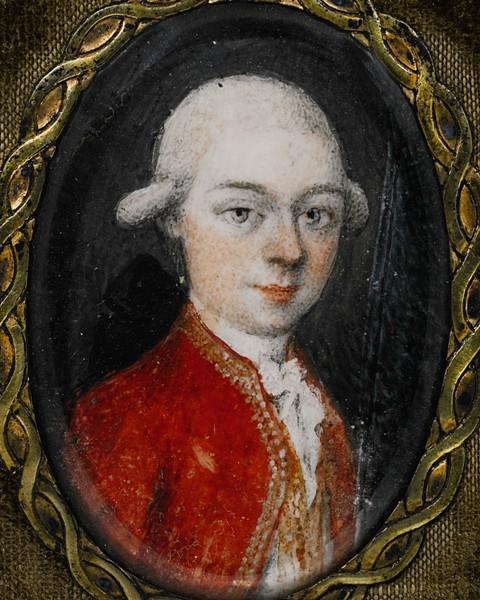 Sotheby’s is to sell a rare portrait miniature of Mozart in London on 20 November 2014. Given as a gift by the composer to his cousin and first love Maria Anna Thekla Mozart, the picture captures Wolfgang Amadeus at the age of 21. Passed down through generations of the same family, the portrait has never before been seen by the wider public in colour.

Thought to be worn as a locket, the 4cm image was painted by an anonymous artist in 1777 and is referred to a number of times in a series of nine letters written by the composer to his cousin during their short attachment – displaying his usual ‘scatological humour’.  The portrait will be the centrepiece of Sotheby’s Music, Continental and Russian Books and Manuscripts sale, carrying an estimate of £200,000-300,000.

‘One of only two authentic paintings of Mozart remaining in private hands and one of only a dozen or so authentic paintings and drawings of the composer, this object's significance is virtually unparalleled’ said Dr Stephen Roe, Sotheby’s worldwide head of Books & Manuscripts. ‘Mozart's features come as a revelation when viewed in the flesh; the detail in the face is remarkable, formed by the tiniest dots of gouache applied with the utmost precision and delicacy, and a marvellous luminosity pervades the entire image. The artist, though unknown, has caught the essence of the composer.’