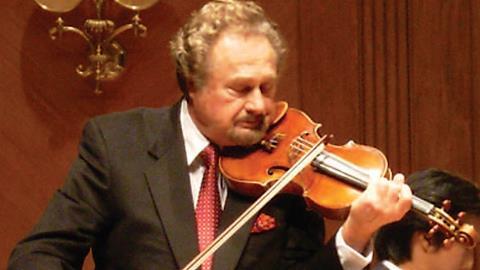 Portamento: the carrying of a sound with the voice or stringed instrument, the transition from one note to another, higher or lower, without any break in the sound.

This expressive device was the key to the Romantic style of violin playing. One can immediately identify an artist by his or her use of portamento to express their interpretation of the music. At the turn of the 20th century early recordings of Sarasate, Kubelik and others give evidence of a preoccupation with technique; it was Eugène Ysaÿe whose poetic approach to the gliding technique made the violin sing like the human voice. His few recordings demonstrate his excessive use of portamento.

In my youth I attended many performances by these great players. I would sit in the first or second row, studying every move, and tried to emulate what they did when I got home. What I learned from all these great artists was that you must never press the fingers of the left hand in affecting a slide, and you must make sure the bow speed is equal to the speed of your slide. I employ all of the sliding techniques in my interpretations.

In the 1960s a change in violin playing began – a trend towards more literal and accurate interpretations of the written note and a purification of performance mannerisms. I often refer to this period as ‘The Inquisition’, where portamento was shunned and personal style and taste were considered old-fashioned. However, Oistrakh, Stern and Szeryng were outstanding artists of this period, with beautiful tones, who played with a minimum of sliding and personal mannerisms. This style has more or less persisted until the present day, although I have begun to see signs of change again.

Portamento, when used tastefully, can bring a piece to life with the warmth and personality of the artist. Without it we might as well computerise our interpretations and eliminate portamento forever.