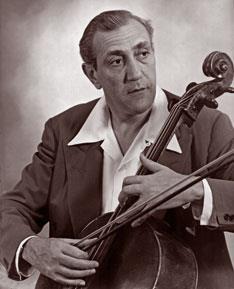 If you have ever wondered what one hundred cellists performing on stage en masse might sound like, then make your way to the Walt Disney Concert Hall in downtown Los Angeles on 17 May for an evening of music that includes the first piece in Villa-Lobos’s Bachianas Brasileiras suite, scored for an orchestra of cellos, and the world premiere of Threads and Traces written by the British composer Anna Clyne and commissioned by the Los Angeles Philharmonic for the second Piatigorsky International Cello Festival, which launched on Friday.

Festival founder Ralph Kirshbaum has held the Gregor Piatigorsky (pictured) chair in violoncello at the University of Southern California’s Thornton School of Music since 2008, and inaugurated the festival that bears Piatigorsky’s name in 2012. With this second edition he hopes audiences will discover new repertoire and new artists among the celebrity players and blockbuster showpieces scheduled over the next eight days. In keeping with the grand scale of the festival, Kirshbaum programmed three opening concerts featuring three cello concertos over three days. As a musical birthday present to himself (he turns 70 this year), Kirshbaum took the solo role in the first of these -- Bloch’s Schelomo with the LA Philharmonic conducted by Leonard Slatkin - and the festival continues today with the Argentine star Sol Gabetta in Martinu¯’s Cello Concerto no.1 and an evening recital from Yo-Yo Ma with pianist Kathryn Stott -- both at the Walt Disney Concert Hall. In between Kirshbaum has programmed the event’s opening gala concert at the University of Southern California, showcasing a diverse programme from cellists Giovanni Sollima, Wolfgang Emanuel Schmidt and Jens Peter Maintz, and concluding with Te Amo, Argentina, an audio-visual journey combining music, dance and film featuring cello soloist Antonio Lysy.

This year the festival presents a new chamber music series, Quintet+, each programme featuring the Calder Quartet in a string quintet with a festival artist, and the event also partners with the Los Angeles Chamber Orchestra for the final concert of LACO’s ‘Baroque Conversations’ series, a programme of Baroque and early Classical cello concertos led by soloists Colin Carr, Thomas Demenga, Jean-Guihen Queryas and Sollima. The festival concludes with performances of the complete works for cello and piano by Beethoven – five sonatas and three sets of variations, each performed by a different festival cellist.

For full event listings, including details of masterclasses throughout the festival visit piatigorskyfestival.usc.edu.

The Strad is at the International Piatigorsky Cello Festival from 13-22 May. A full report of the festival will appear in the July issue of The Strad.

Read: Cellist Mischa Maisky on studying with Piatigorsky and Rostropovich