A list from our January 1892 issue still rings true 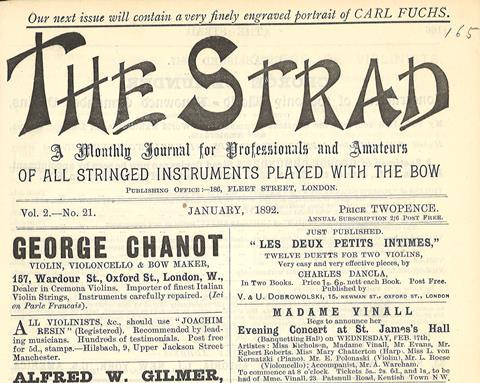 Don’t let the rosin accumulate on your violin, as there is no tone in rosin; it stops up the pores of the wood, and, moreover, looks slovenly.

Don’t put the bow away in the case without unloosening the hair. If it is kept tightened, it will soon be useless.

Don’t hang your violin on your music-stand when you have finished playing a piece, as it is liable to fall and be broken.

Don’t break the hair off of your bow when one breaks; cut it at each end. You are liable to pull the hair out of the bow if you pull it to break it.

Don’t try to play in public what you cannot do well at home.

Don’t let the D string remain on your violin too long; remove it at least every two months, as it gets dry and hard, making the tone rough.

Don’t let the neck of your violin hang down when you are playing and lay your head on it. It looks as if you were going to sleep. Hold the violin up.

Don’t let jealousy arise in the orchestra, and talk about one another behind their backs. It will soon demoralise the whole organisation.

Don’t write to the editor of a musical paper, or any one, asking the value of a violin that has a label on the inside with an old name and date printed on it, as he can tell nothing about it. A violin is valued for its tone and workmanship, and those labels are printed the same as circulars and pasted in the violin, to suggest that the instrument was made after the model of that maker. The genuine instruments are a rarity and their existence and whereabouts are generally known to connoisseurs.

Don’t put your violin away without wiping it dry all over with a cloth or chamois skin, as it preserves the instrument and saves strings. Don’t lay your violin down on its side by your chair during intermission of playing. Someone, not seeing it, may, in walking about, kick it to pieces. Better hold it, or put it in its case, which you can have near you.

Don’t let your music get all scattered and torn, when you can get at a store brown wrapping-paper to cover it. Music costs money.

Don’t get impatient with a pupil in giving a lesson. Remember you were not able to do much better yourself once.

Don’t have your strings of unequal size – the D string very large and the E string small. Get them of average size throughout by a string gauge, and when you have them right, keep them so. If you have no string gauge, save a piece of old string for your guide.

Don’t think you know all there is about the violin, for that height has never been reached yet.

Don’t stamp on the floor with your foot to keep the time; it is a disagreeable noise. Moving the right foot in your boot will answer all the purpose.

Don’t spit on the pegs of your violin to make them stick. Rub some chalk on them. If they are fitted and still slip badly, put a little rosin on them.

Don’t let any of the strings down when you are done playing, as it puts the violin out of order, and you break strings quicker.

Don’t think any kind of playing will do for some people, for your carelessness will soon be found out, engagements will be lost, and you will wonder why. Do your best at all times.

Don’t wind your strings around the neck of your violin; cut them the right length, and put the portions not wanted in a box in your case. They dry up quickly when exposed.

Don’t come to rehearsal at quarter-past eight, when eight o’clock is the hour given, unless a very satisfactory reason is shown. Be prompt, and people will learn to depend on you.

Don’t put a good violin in a damp place, as it will hurt it very much, and is apt to come unglued.

Don’t keep constantly shifting the bridge and sound post, when they have been put in their place properly. The slightest change makes a difference in the tone of the violin.

Don’t let your violin lie around on tables and other places, as it shows carelessness. Put it away in its case when you are done with it.

Don’t think you can neglect exercises and play the violin well; their study enables you to master your instrument.

Read 30 rules for students from our November 1890 issue.