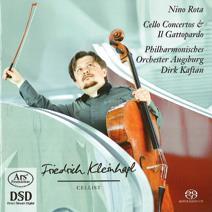 As with Korngold, Nino Rota’s reputation has suffered as a result of his considerable success as a composer for films, almost as if commercial writing could never be compatible with more serious invention. But this element of direct melody – the hallmark of his film scores – is the quality that strikes one most in his works, be it the whimsical and chirpy Il gattopardo or the lyrical slow movements of the two cello concertos.

Often melodramatic and heart-on-sleeve, Rota’s music increasingly endears itself on repeated listening, but the pearls of melody appear too infrequently in the Romantic First Concerto. Moreover, this rather dry recording does little to bolster Friedrich Kleinhapl’s Guadagnini, and in both the faster passagework of the First Concerto’s Allegro and the finale of the Second the cello timbre needs more bloom. The orchestral partnership, however, is precise apart from some sour woodwind tuning in the slow movement of the First Concerto.

More successful in its overall impact is the Classically characterised Second Concerto, where the material is a little more striking. Kleinhapl gives a stylish account and weaves his way around the expressive melodies and technical hurdles with aplomb. He is again incisively partnered by the Augsburg Philharmonic. However, both parties could have etched the dramatic characterisation more strongly, certainly when compared to rival accounts such as Dmitry Yablonsky’s on Chandos.