A long-awaited second volume exploring the legacy of Tartini 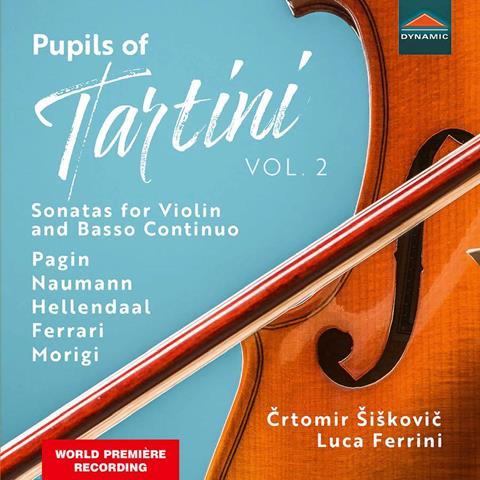 Description: A long-awaited second volume exploring the legacy of Tartini

Coming nine years after vol.1, this disc juxtaposes violin sonatas by a selection of Tartini’s pupils who disseminated his cultural legacy. Črtomir Šiškovič, playing a modern violin, is technically on top of his game, realising the quasi-Locatellian figuration and the harmonic effects in the opening Allegro of Ferrari’s G major Sonata with impressive accuracy. He nods occasionally to historical style, notably in his addition of extempore ornamentation in repeated passages; however, his idiosyncratic approach to matters of articulation and accentuation, highlighted by the close recording, tends to fragment the line and leads to some laboured interpretations, especially of Pagin’s A major Sonata, the two Allegros of which also seem well under tempo, and the Andante of Hellendaal’s C minor Sonata.

Best suited to Šiškovič’s approach are the two Allegro movements of Hellendaal’s sonata (which bear a certain resemblance to Tartini’s ‘Devil’s Trill’), the animated finale of Morigi’s C major Sonata and the variation-form finale of Ferrari’s, which is based on a folksy minuetto theme, all of which he negotiates with aplomb. Naumann’s conservative, two-movement G major Sonata puts harpsichordist Luca Ferrini centre stage, while also including some pleasing repartee, and Šiškovič comes closest to approximating Tartini’s concept of cantabile in the Adagio of the Morigi sonata.