An Italian team has recorded the mysterious ‘third tone’, created when playing a two-note chord, as part of its research 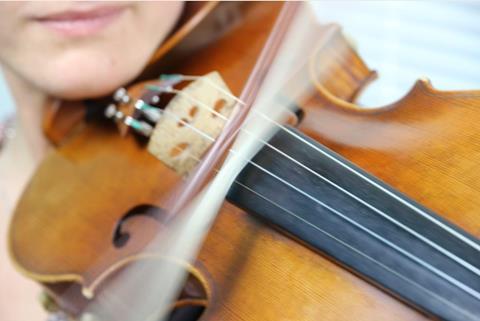 Tartini tones can sometimes be heard when playing double-stops

A team of researchers in Italy have completed a study apparently showing that well-made instruments are more capable of producing so-called ‘Tartini tones’ than mass-produced ones. The research, published on 1 November in the Journal of the Acoustical Society of America, examined five violins from 1700, 1778, 1820, 1971 and 2013, and found that the Tartini tones were stronger in the older instruments while those made by the 2013 instrument (a ‘factory-made cheap violin’) were the least audible.

Violinists can often hear Tartini tones (also known as ‘combination tones’) when playing double-stops. When they are played precisely in tune, a third tone can often be heard, the pitch depending on the interval of the double-stop. For instance, when performing a perfect 5th, the Tartini tone will always be an octave below the lower note. Players sometimes use this effect during practice sessions, to assess whether or not they are playing perfectly in tune.

‘Up to now, the combination tones generated by the violin were considered too small to be heard, and therefore, of no importance in music,’ said Giovanni Cecchi of the Università di Firenze, a co-author of the study. ‘Our results change this view by showing that combination tones generated by violins of good quality can be easily heard, affecting the perception of the intervals.’

For this study, a professional violinist performed a series of double-stops in an auditorium, on each of the five violins. The team then recorded and processed the resulting audio signals. While each violin produced Tartini tones, the harmonic distortions and air resonance from each violin contributed to the Tartini tone’s unique amplitude.

‘We found that combination tones were much stronger and clearly audible in good violins,’ Cecchi added. ‘The strongest one was found in an old Italian violin, made in Bologna in 1700 by the famous luthier Carlo Annibale Tononi. Combination tones were instead negligibly small in violins of poor quality.’ Factors that may have increased the amount of air resonance included the structural material and the techniques used to craft the instrument.

Tartini tones are named after the composer Giuseppe Tartini, who wrote about them in 1714, although they had previously been described by the German music theorist Georg Andreas Sorge. It was long thought that Tartini tones were simply an auditory illusion created by the vibration of the cochlea (inner ear) while listening to two tones simultaneously. However, the same research team proved in 2020 that the tones actually existed in the air as well, allowing them to measure and record them for the first time.

In the April 2018 issue of The Strad, cellist Minna Rose Chung explained how Tartini tones could be used by teachers and students: ‘You can prove to them “scientifically” when double-stops are out of tune. [Students] are less likely to feel overwhelmed by double-stops if they can focus on producing the Tartini tone: being able to hear specific tones in multi-stop passages becomes an addictive pursuit, and it increases confidence at the same time. Younger kids love it too, because it gives them something to look for every time they play a double-stop. It’s like a treasure hunt, which they find exciting.’

Along with Cecchi, the study’s co-authors were Gabriele Caselli of the Conservatorio Musicale Lorenzo Perosi in Campobasso; and Giulio Masetti of the Istituto di Scienza e Tecnologia dell’Informazione, Consiglio Nazionale delle Ricerche in Pisa. They plan to follow up the experiment by analysing a greater number and variety of violins, to identify which violin part serves as the exact origin of the Tartini tones. The paper can be read in full here.

The five instruments under investigation were: