Quatuor Hanson: All Shall Not Die

Audacious and refined go hand in hand in these intriguing performances 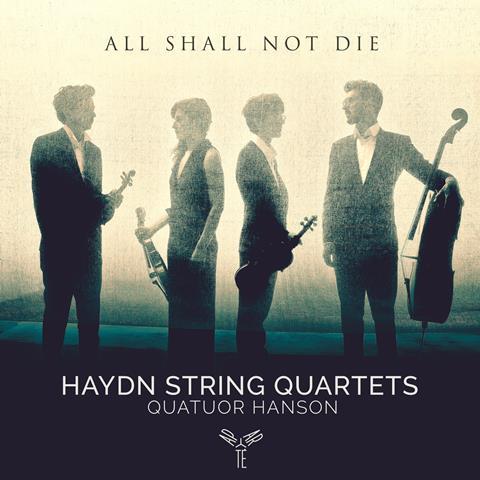 Quatuor Hanson: All Shall Not Die

Description: Audacious and refined go hand in hand in these intriguing performances

Titled after a citation in Latin (from Horace) on Haydn’s tombstone, this debut release amply demonstrates why Quatuor Hanson has won plaudits in international competitions. Aided by a close-miked, warm and well-balanced recording, these players offer inspired, expressively audacious readings full of character, spontaneity and refinement of detail. They mould phrases sensitively and take enormous pains to allow time and space for their interpretations to register. They also emphasise Haydn’s harmonic surprises with maximum relish, notably just before the sotto voce second theme of op.77 no.2. Their dynamic range is wide – sample the explosive fortissimos in the opening movement of op.33 no.5 – and ensemble is largely polished throughout, leader Anton Hanson making the most of opportunities for rubato, especially in the slow movements of op.20 no.5, op.50 no.6 and op.54 no.2. They admirably convey the wit of the Scherzo of op.33 no.5 and their innate understanding of fugal structures allows listeners to delight in Haydn’s contrapuntal invention in the finale of op.20 no.5.

They are their own bosses regarding the implementation of Haydn’s repeat markings and articulation indications, and their realisation of the notated acciaccaturas in the Menuetto of op.54 no.2 seems ill-judged. Further, their tempos for the Menuet and finale of op.77 no.2 are too fast for comfort, occasioning a slight dip in standards of precision and intonation, and although Hanson negotiates his frequent stratospheric flights with due panache, his occasional addition of extempore ornamentation and his extended use of the glissando effect in the finale of op.76 no.2 fail to convince.