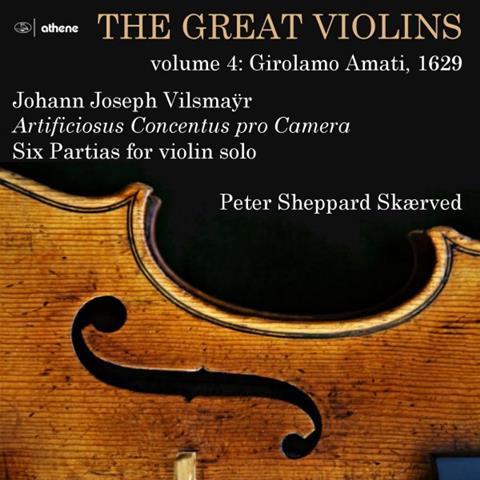 Description: Another enterprising pairing of a 17th-century violin and composer yields some gems

The zeal of Peter Sheppard Skærved seems to have no end: here he tackles the six ‘Partias’ by Johann Joseph Vilsmaÿr (1663–1722), who worked in Salzburg from 1689 and dedicated the 1715 set to the Archbishop.

The music is mostly in dance forms, some of them abstruse, such as Brunada and Canario; and usually very brief, almost like wisps of sound which vanish into thin air. The set divides naturally into two, with Partias 2, 4 and 6 ending in more substantial movements, respectively Ciaccona, Passacaglia and Aria Variata.

In his fulsome Latin dedication, Vilsmaÿr indicates that he composed the pieces in his private chamber, and PSS takes his cue from this idea. He seems quite taken with the thought of the composer virtually improvising the 56 movements, and tailors his interpretations accordingly.

Most of the time, it works. The Girolamo Amati violin from the Royal Academy of Music’s collection has a very bright tone – a 2010 ‘Biber-model’ bow by Antonio Airenti of Genoa is used – and on repeated hearings the pieces grow on me. I can imagine more resolute performances of certain pieces, such as the Passacaglia mentioned above, but my main feeling is gratitude that the Partias have been made available in this form.