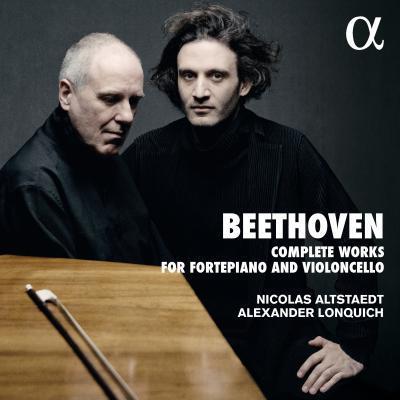 We forget how radical Beethoven’s Cello Sonatas were at the time of writing. Following the precedent of Mozart’s violin sonatas, Beethoven expanded the scope of the genre’s structure and dynamic vocabulary into another sound world. In this beautifully recorded release, the interpretations by Altstaedt and Lonquich bristle with boldness, exploiting the revolutionary aspects of the music with relish.

The performances are vivid and dramatic, conveying a tremendous sense of theatre in the slow introductions of the F major and G minor sonatas. There’s a wonderful feeling of forward momentum in the alla breve opening movement of the A major, the lyrical operatic elements and the tender quote from Bach’s St John Passion in the development projected with expressive warmth. Then the storm erupts and we are lifted off our seats, as in the unbuttoned and edgy Scherzo, whose displaced beats sound extremely modern in this performance. The duo’s reflective approach to the inner world of Beethoven’s creativity in the concentrated C major Andante and the poignant Adagio of the D major form a striking contrast to the emblazoned Allegro movements of both sonatas. The performances of the three sets of Variations are no less compelling, both players revelling in Beethoven’s seemingly spontaneous inventiveness.

Altstaedt uses metal-covered C and G strings, thereby enabling him to power the explosive gestures of the lower registers with tremendous force, whereas gut D and A strings provide the ideal platform for his exquisite whispered utterances. The timbre of the 1826 Graf fortepiano perfectly complements the cello, with a rhythmic edge from the more percussive sound of the instrument. Quite simply, the range of timbre, dynamics, and characterisation in these performances is phenomenal.