Compelling advocacy of the music of a forgotten Hungarian 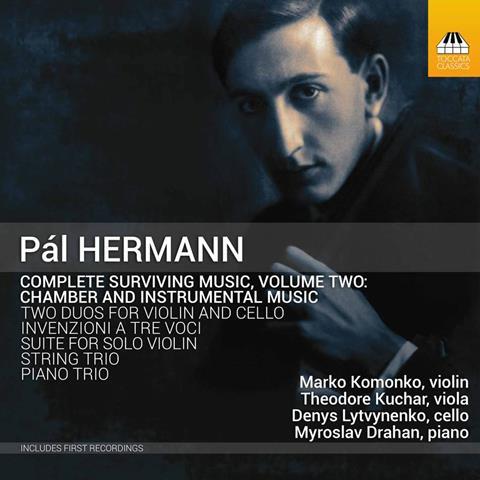 Description: Compelling advocacy of the music of a forgotten Hungarian

Pál Hermann (1902–44) was a Hungarian-born cellist and composer who studied with Bartók, Kodály and Hugo Becker, was dubbed the ‘second Pablo Casals’, played for Schoenberg, was commended by Schreker, and taught in Berlin alongside Hindemith. That he is almost forgotten is one of the many tragedies of the 20th century: after a successful early career as a travelling virtuoso, he was forced by his Jewishness into a more urgent itinerant existence after 1933, escaping ultimately to Toulouse, where a spot-check by the Gestapo in 1944 caught up with him and he was sent to his death in a Lithuanian prison camp. Much of his music was written for him to play with colleagues and in particular with his duo partner Zoltán Székely, dedicatee of Bartók’s Second Violin Concerto, but little was published and only a smattering of pieces survives in manuscript (many of them newly transcribed and available for free on the IMSLP website).

This second volume concentrates on his chamber music. Of all the pieces here, the second Duo for violin and cello of 1929–30 is the most appealing, both for its textural ingenuities and for its high-spirited Hungarian flavour. The first Duo of 1920 is more diffuse but the short String Trio (1921) and Piano Trio (1924) have their moments and the untitled ‘Suite’ for solo violin (1919) is a remarkable work for a 17-year-old. The excellent recording was made in Lviv last year with largely Ukrainian musicians, who play everything with vivid attention to detail and an effective sense of ensemble.