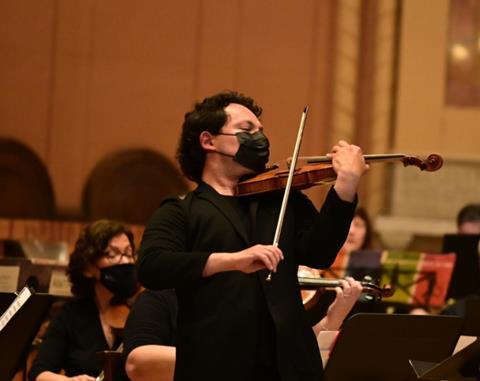 Founded in 1924 as the Civic Symphony of Boston (its name was changed this year to the Boston Civic Symphony), this is the city’s second oldest orchestra. This concert originated in First Church in Cambridge, a historic structure located near Harvard University. A socially distanced audience heard a similarly distanced orchestra, all wearing masks, perform a programme under Venezuelan-born music director Francisco Noya, now in his fourth season in that post.

Lyric for Strings, a 1946 work by American composer George Walker (1922–2018), was written in tribute to his grandmother and later incorporated into his String Quartet no.1. It is a short, elegiac movement that suggests acquaintance with Samuel Barber’s Adagio for Strings. But Walker’s lament is less histrionic in character, with contrasting lighter material. It was creditably performed. Respighi’s Gli uccelli followed, played more slowly than usual.

Yevgeny Kutik, born in Minsk and currently a Boston resident, studied with Roman Totenberg and Donald Weilerstein and has degrees from Boston University and the New England Conservatory. In Beethoven’s Violin Concerto he produced a cultivated sound on a 1915 instrument by Stefano Scarampella. As a performance, however, it seemed an interpretation still in progress, with elements of virtuosity, tonal brilliance, eloquence, rhythmic articulation, and direct musical expression yet to coalesce successfully. The socially distant placement of the orchestra worked against crisp ensemble.