Janet Sung: The Deeper the Blue 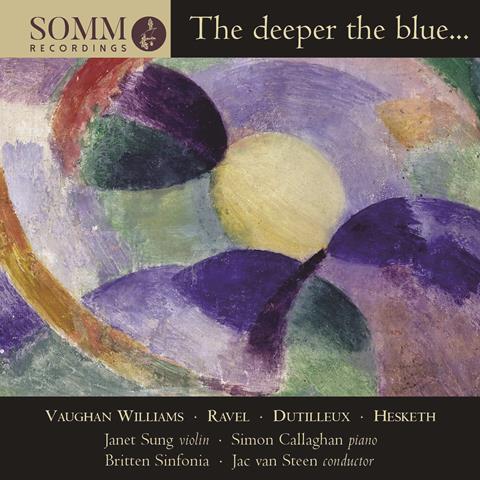 Janet Sung: The Deeper the Blue

Inspired by a passage from Wassily Kandinsky’s Concerning the Spiritual in Art – ‘The deeper the blue becomes, the more strongly it calls one towards the infinite’ – and, as Michael Quinn points out in his insightful note, featuring two pairs of teacher–students, this enterprising programme focuses intentionally on music more celebrated (rightly or wrongly) for its stylistic flavours and colours than for its architectural rigour.

Indeed, it is Janet Sung’s deft ability to sound equally at home in the modal neo-Classicisms of Vaughan Williams’s Violin Concerto, the heady gypsy incense of Ravel’s Tzigane and kaleidoscopic invention of Kenneth Hesketh’s Inscription-Transformation that is so compelling here.

Sung’s c.1600 Maggini violin sounds especially ravishing in Ravel’s 1927 Sonata, with its emotionally ambivalent central Blues movement – one is never quite sure whether Ravel is merely fascinated by the popular idiom or really ‘feels’ it. Sung’s narrow, medium-fast vibrato and gentle espressivo inflections fuse beguilingly in the sonata and VW Concerto, whose tantalising, sensual cool is captured in sound of gently cushioned radiance by Ben Connellan and Siva Oke. Hesketh’s inspired 2014 orchestral realisation of his teacher Dutilleux’s early piano work Au gré des ondes (‘At the whim of waves’), which like Ravel’s Le Tombeau de Couperin provides the musical icing on the cake.