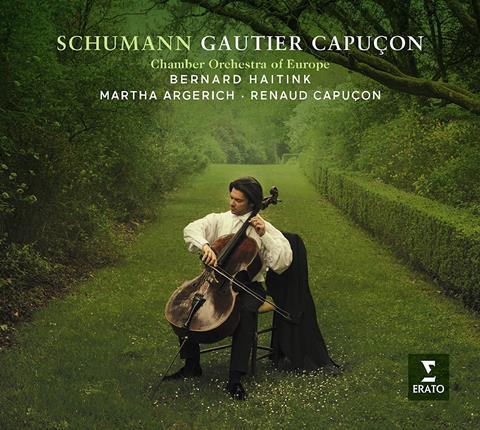 It’s only in recent years that Schumann’s Cello Concerto has been taken seriously, hindered perhaps by its unshowy exterior and the fantasia-like feel of its interlinked movements. Although, like everything on this disc, it’s taken from a live performance, we don’t have to worry about the balance between soloist and orchestra (another weakness of the piece).

Sadly the orchestra is not captured with great depth or detail. Capuçon avoids over-Romanticising and pays loving attention to crafting his phrasing. His realistically recorded sound – rich, open and suave – is upmarket without being artificially plush.

For the remainder of the disc he is joined by long-time collaborator and all-round piano legend Martha Argerich. These chamber works rewardingly show Schumann in a less reserved guise.

There’s contrast between the nostalgic and the fiery in the Adagio and Allegro, while the second and third movements of the op.73 Fantasiestücke have a breathless momentum that brings them alive.

The first and fourth of the Fünf Stücke are suitably robust in spirit, compared with the lullaby-like second piece. As a trio (joined by Gautier’s violinist brother Renaud), they play the op.88 Fantasiestücke with a special cogency and fluidity, creating the highlight of the disc.

Less well-judged is the disc’s photoshoot, in which the cellist is got up in white tie and tiered Victorian cape.