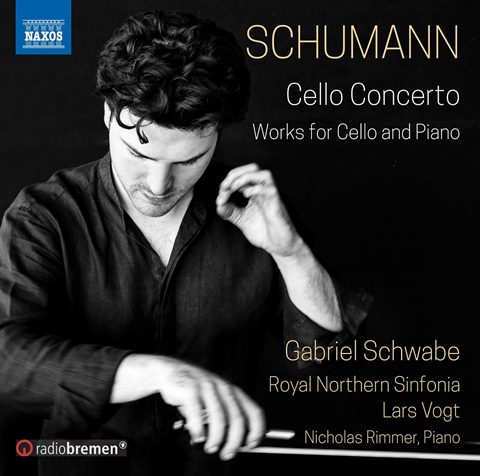 Until comparatively recently, Schumann’s orchestral music was invariably played with an emotional heft and sonic amplitude more redolent of the late-Romantic Russian school. By comparison, Gabriel Schwabe belongs to an emerging group of young musicians who play with a defter touch and beguiling tonal transparency that allows the late Cello Concerto to take full flight.

By aligning its free-flowing fantasy with the neo-Classical sound worlds of Mendelssohn and Saint-Saëns, Schwabe lightens the impact of Schumann’s middle-register preoccupations, elegantly counterpointing the Royal Northern Sinfonia’s subtle detailing of the score under Lars Vogt’s inspired direction. The fine recording, made at Sage Gateshead, ventilates the textures further while successfully conveying the beguiling chamber-scale responses of the entire ensemble.

Considering how beautifully Schumann wrote for the cello, it is perhaps surprising that the only other solo work he composed for it exclusively is the Five Pieces in Popular Style, which in Schwabe’s and pianist Nicholas Rimmer’s sensitive hands radiate enchantment in every bar.

The life-enhancing surge that characterises the more high-spirited moments of the op.70 Adagio and Allegro and op.73 Fantasiestücke may be a shade underpowered here, but Schwabe’s own transcriptions of the op.94 Romances and Intermezzo from the ‘FAE’ Sonata go like a dream.