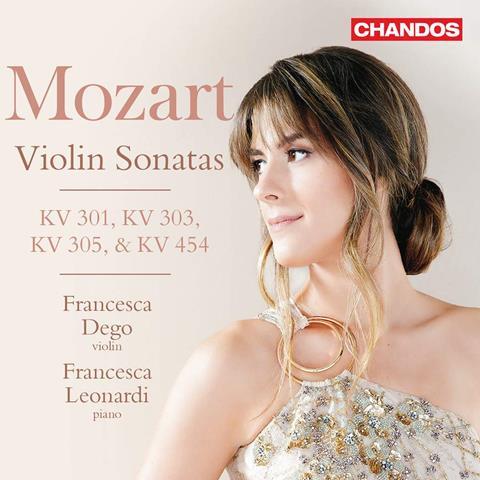 Mere months after impressing in a pair of Mozart violin concertos (reviewed November 2021), Francesca Dego returns with a programme of sonatas in which she is partnered by her long-time piano co-conspirator Francesca Leonardi. It’s truly a tale of two Francescas, as the balance between them is subtly judged throughout, each responding in the moment to the other, darting in and out of each other’s shadow and complementing each other just about ideally. The approach is modern-instrument with period awareness, the youthful playfulness of much of this music well caught. Repeats – of which there is generous provision – are cheekily ornamented, and Dego draws some beguiling sounds from her instrument (unidentified in the documentation). The sound, captured in the Fazioli Concert Hall in Sacile, 40 miles north of Venice, offers focus within its own natural ambience.

The earlier disc coupled concertos nos.3 and 4 with K304, the only minor-key sonata in the set of six composed in Mannheim and Paris in 1778 and published as ‘op.1’. These are all two-movement works with only short passages of slow music, which seems to suit Dego, who responds vividly to the freshness of three more of these earlier works. The Largo introduction and the central Allegretto of the later K454 (Vienna, 1784), though, transpire more chastely, a touch less expressively than they do in the hands of, for example, Alina Ibragimova and Cédric Tiberghien (Hyperion). Nevertheless, by and large Dego and Leonardi’s polished and deeply considered performances of all four sonatas provide 70 minutes of unvarnished pleasure.