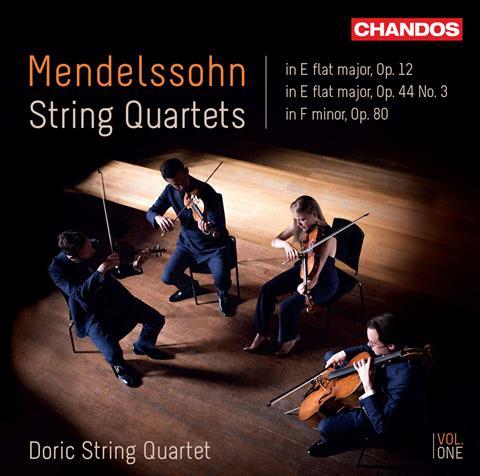 Well versed in Mendelssohn’s idiom, the Doric offers intelligent readings which, faithful to the composer’s prescriptions, reveal a wealth of detail through richly blended ensemble and perceptive structural observation. They are well served by a resonant yet clear recording, but their use of a set of reproduction classical bows (see August issue) appears to make little difference either to their performing approach or to its outcomes.

They sustain the lyrical expansiveness of op.12’s opening movement with warmth and intensity, gambol and scamper effortlessly through its Canzonetta and luxuriate in the increasingly more impassioned Andante espressivo. Alex Redington negotiates the first violin part with aplomb throughout, particularly in the impetuous finale, which gallops along, periodically recalling material from the first movement.

His colleagues match him, technically and expressively, and showcase their own agility when interweaving semiquaver interpolations in the first movement of op.44 no.3, negotiating the arpeggios of its fiery rondo finale and realising its elfin scherzo with puckish playfulness and its slow movement with poignant sincerity.

The Doric garners all the requisite tension and anguish in its rendition of the op.80 quartet, in which Mendelssohn expressed his desolation following his sister’s sudden death. The players convey the first movement’s agitated textures and the macabre, driving scherzo and its hushed, sinuous trio with compelling dramatic effect, and conclude the lyrical Adagio with a touching sadness; but they are strong in the harrowing finale, with its inner tensions, wide-ranging modulations and, towards the end, a cry of despair from the first violin, powerfully realised. Volume 2 is awaited with eager anticipation.