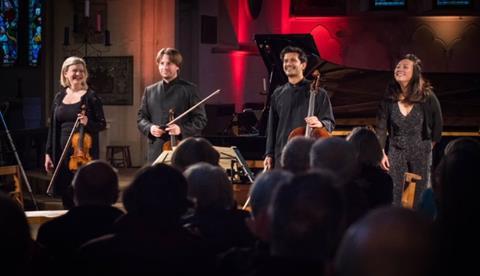 It would have been hard for a programme to have felt more of its time than this one, delivered one cold December afternoon, courtesy of the Highgate International Chamber Music Festival, almost two years into a global pandemic characterised by separation and loss. It opened with Shostakovich’s String Quartet no.11. From its initial violin line, spun by Natalie Klouda as the frailest thread, it cast an atmosphere of utter, bleak despair, the foursome (with Alexandra Raikhlina, Alexandros Koustas and Robert Cohen) largely eschewing vibrato – so when an instrument did rise up to sing out, it created maximum impact, meaning Raikhlina’s richly toned, elegiac song in the Elegy: Adagio really hit its mark.

Eleanor Alberga’s single-movement Remember in memory of her mother, based on the old Jamaica folk song Come Back Liza, gave loss a more yearning, romantic voice, now with Benjamin Roskams and Ashok Klouda – before recalling the Shostakovich by similarly fading away.

Then came Dvořák’s Piano Quartet in E flat major. Ashok Klouda and Roskams remained, now joined by Wu Qian and Alina Ibragimova. While their stormy outburst in the Lento was a devastating one, the equal passion and sheer panache they brought to the work’s warm, dancing exuberance earned instinctive applause after the first movement and grateful cheers at the Finale’s close, the buoyed-up audience perhaps hoping that life would mirror this concert’s art.