Tim Homfray reports from the concert of Bach, Stravinsky and Korngold at London’s Wigmore Hall on 10 July 2022 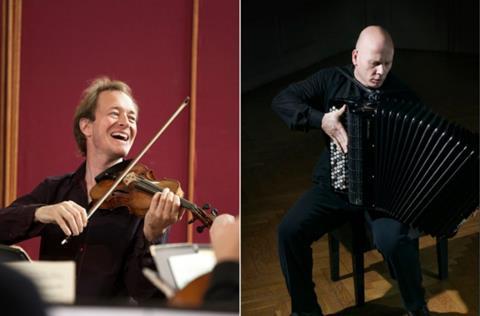 In the hands of these two musicians, violin and accordion made a splendid sound together at this Wigmore Hall recital. The versatility of the latter came across effectively as James Crabb took on the keyboard part of Bach’s E major Sonata BWV1016, its bass strong and resonant as Marwood played with elegance and freedom. Admittedly, the fugal opening of the second movement did bring disconcerting thoughts of a sea shanty, but that aside, there was counterpoint in contrasting colours and a nice ebb and flow of dynamics. The interwoven dialogues and duets of the Adagio were supple and the final Allegro was bright-toned and energetic, with great clarity and articulation from Marwood.

In the Divertimento from Stravinsky’s The Fairy’s Kiss they seemed to enter the sound world of Piazzolla, with bursts of vivid theatre and Marwood powerful on the G string. They neatly negotiated Stravinsky’s quirky shifts of direction, and Marwood handled its considerable technical demands with style. To the first movement of the Suite from Much Ado about Nothing – Korngold’s decidedly gemütlich take on Shakespeare – Marwood brought a suppleness that was very engaging, while his tone was full-bodied in the gruff March; the Garden Scene yielded from him gorgeous lyricism, underpinned by the richness of the accordion, before a joyous final Hornpipe.