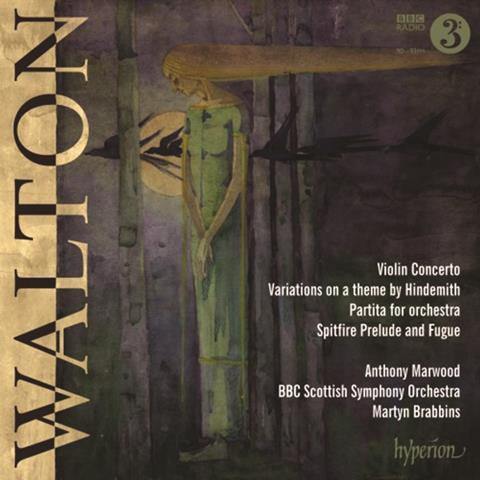 After the soft tissue of Tasmin Little’s account on Chandos (reviewed August 2014), here’s a Walton Concerto with real bone and sinew. Anthony Marwood has the technique to encompass the dazzling fingerwork designed with Heifetz in mind, and his wiry vibrato and fat-free tone on the upper strings recall an older, less indulgent approach to music which isn’t all long Romantic lines and softly caressing orchestral colour.  A red-carpet recording from Hyperion provides all the necessary depth and plushness of sound, while Marwood concentrates on the arresting melancholy of the opening Andante and the needle-point sardonic humour of the Scherzo. His success in tying together the variation episodes of the long finale draws it within the circle of similarly ambitious concerto structures by composers as disparate as Elgar, Berg and Shostakovich. A 2013 recording of the two symphonies gave notice that in Brabbins and the BBC Scottish, Hyperion had found inspired Walton interpreters to match the dynamic 1970s partnership of André Previn and the LSO, and readers of The Strad shouldn’t overlook the rest of this generous 82-minute album. It is commonly supposed that Walton’s invention tailed off: no evidence of that here in the bracing, nervous jubilance of the Partita (1957) and, from six years later, the Hindemith Variations’ undimmed mastery of orchestral colour. An unqualified success. PETER QUANTRILL