Pristine performances bring out the classicist in Schubert 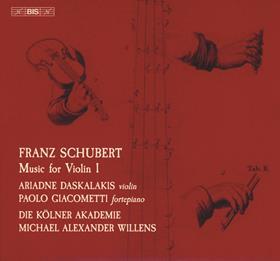 Despite Schubert’s Romantic poetical leanings, he remained a Classicist at heart. Even in his later instrumental works, when he began expanding the temporal scale of his vision – as in the C major Fantasy, included here – his use of structural building blocks and motivic interplay remained essentially true to Mozartian principles. As a result his music is particularly well suited to having a veneer of late 19th-century rhetoric removed (as here) to reveal pristine surfaces, glistening in a revitalised world of vibrato-reduced clarity, enhanced phrasal flexibility and rhythmic dynamism.

This is especially noticeable in the relatively early, orchestra-accompanied Rondo, Konzertstück and Polonaise, which in Ariadne Daskalakis’s skilled hands cascade off the fingerboard with a litheness and shimmering delight that capture the music’s innate charm and dance-like vivacity with a beguiling sureness of touch. Dating from the same period (1816), the G minor Sonata turns intermittently to the dark side, anticipating the tantalising harmonic shadings of Schubert’s later music, as exemplified by the 1827 Fantasy. Here I wondered, despite the engaging tonal purity of Paolo Giacometti’s fortepiano, whether just occasionally the music might have been let off the leash with greater abandon, although there is no doubting the refreshing candour of these fine performances, nor the excellence of the recorded sound, which becomes exceptionally lifelike when the SACD track is activated.