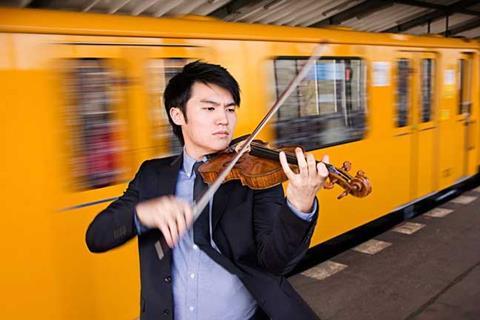 Born in Taiwan and raised in Australia, Ray Chen was accepted to the Curtis Institute of Music at age 15, where he studied with Aaron Rosand and was supported by Young Concert Artists. He burst onto the scene in 2008, winning the Yehudi Menuhin Competition, before following up his success with first prize at the Queen Elisabeth Competition the next year. In 2012 he became the youngest soloist ever to perform in the televised Nobel Prize Concert for the Nobel Laureates and the Swedish Royal Family. In 2013 he made his Carnegie Hall debut with the Royal Stockholm Philharmonic and Sakari Oramo. Chen is committed to breaking down barriers between classical music, fashion and pop culture. He writes a regular blog about his life as a touring soloist, has featured in Vogue magazine and is supported by Giorgio Armani. Chen plays the 1715 “Joachim† Stradivarius violin.