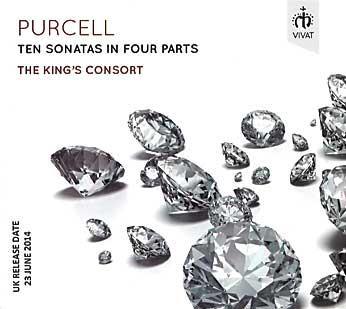 The cover photograph of scattered diamonds feels entirely apt once you listen to the disc, for each of these works is indeed a jewel. Gathered together for publication by Purcell’s wife after his untimely death, but probably written a decade earlier, these trio sonatas, scored for two violins and bass, with a separate basso continuo part, are Purcell at his very best, full of invention and a poignant sweetness.

There is nothing brittle about these performances, rather a feeling of relaxed and sociable music making. Violinists Cecilia Bernardini and Huw Daniel, on 18th-century Italian instruments, play together with a pleasant swing, lending grace to the dances, leaning in tenderly to the sighing suspensions of the slow movements, and leaving plenty of light and space as their lines chase each other in the intricate play of the vivaces and allegros, while Susanne Heinrich’s bass viol line is dexterous and pleasingly expressive as it scurries along, independently of the continuo group.

Credit must go to director Robert King for ordering the ten sonatas in a more coherent key sequence than that in which they were originally published, using the F major ‘Golden’ Sonata as a pivot, and for his enthusiastic and enlightening booklet notes. The finely honed sound is pure gold.