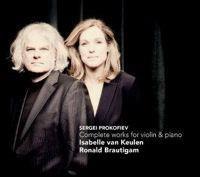 What emerges most clearly from Dutch violinist Isabelle van Keulen’s very accomplished Prokofiev disc is her astonishingly adaptable, flexible sound, with vibrato, tone, attack and phrasing all shifting second by second in response to the music. It’s an approach that pays off richly in Prokofiev’s sombre First Violin Sonata, written during the Second World War. Van Keulen’s account of the anguished work, at times pretty harrowing, feels like a true emotional journey with a superb control of light and shade, elegant yet meaningfully shaped phrases and a sure sense of pacing. She conveys a sinister magic in the scurrying scales that the composer famously described as the ‘wind passing through a graveyard’, and brings a sharp, almost percussive intensity to the second-movement Allegro brusco.

The blithe, neo-Classical lyricism of the Second Violin Sonata is a world away, and here, van Keulen’s high-intensity playing seems at times rather overwrought. She’s precise and pointed in the first movement, and her helter-skelter scherzo is breathtaking, but much of it feels slightly too emphatic. She’s far more at home in the Cinq mélodies, though, combining nonchalant elegance with sensuous beauty.

Ronald Brautigam is very much an equal partner throughout, with superb tonal control to match van Keulen’s, and recorded sound is warm and crisp.