In the November issue, second violinist William Fedkenheuer explains how the four players prepare for a recording of Schubert's Quartettsatz. Here he goes into more detail regarding tempo and intonation 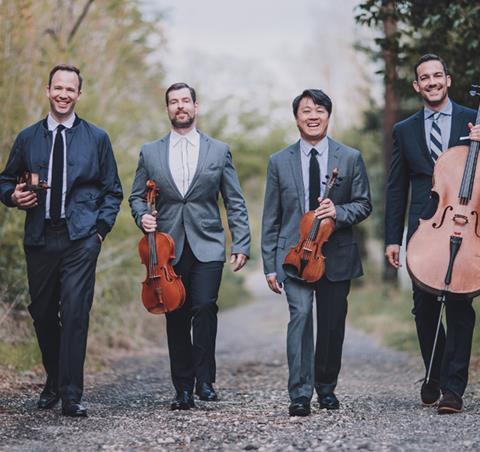 For the final hour of the rehearsal, we work on intonation. The Quartettsatz’s clear textures are particularly unforgiving as far as intonation is concerned, and the variety of registers Schubert uses also demands special attention in order to blend. One of Schubert’s musical hallmarks is using surprising harmonies to give specific emotion to a phrase, so colouring each passage through precise intonation becomes essential. And we realise we could be doing this much better.

There are several spots that demand attention. First, we go to a lovely passage at the end of the exposition based on a falling sequence of 5ths in the cello. Basic intonation skills come into play here: every perfect interval of a 5th and an octave must be exactly adjusted to the pitch of the bass, and each major 3rd should be slightly lowered to create a pure, ‘natural’ tuning so that every chord rings. Additionally, we discuss the balance and blend of each chord, carefully matching brightness and darkness of timbre and using the cello’s colour as the foundation. As we pass these different elements around within the passage, changing our function on almost every chord, it becomes quite tricky. We talk through the passage, making sure we’re clear as a group which voice is adjusting to whom and how in every chord. We play each chord on its own without vibrato to hear and feel the correct tuning, then slowly play the passage chord by chord until it rings and feels secure. If there are issues, again, someone goes out to the couch to listen and coach the other three until it sounds correct.

We cover other passages in the development in the same way – tuning and balancing the octave passages to the lowest voice, discussing the precise placement of pitch centres in remote keys, and agreeing on the specific melodic tendencies of pivotal harmonies, such as the the augmented 6th chord at the end of the development. Again, we try to play as much as we talk, and settle all discrepancies by sending someone out to listen.

Once we’ve finished working through the movement, we retune our instruments and play it through one final time just as we would in a performance. We imagine the exciting feeling of being on stage, and try to integrate everything we’ve worked on in the previous three hours into this play-through. The piece feels greatly improved and our group awareness is heightened. More importantly, we all leave the rehearsal with a clear idea of what we need to work on individually in our own parts, before we bring the Quartettsatz into the recording studio.

Click here to go back to Part One, and find out more about what's in the November issue here