Viola pedagogue Rainer Moog revisits the original score for clarinet and reveals some alterations that may be better left unchanged, in this article from the August 2015 issue of The Strad 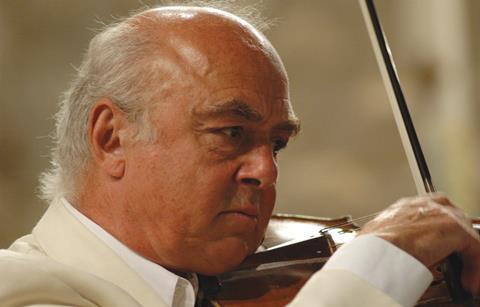 ‘Play as softly as you dare’ – Rainer Moog

Brahms had decided to make the op.111 G major String Quintet his last work, perhaps owing to a series of personal losses in 1880s. But not long afterwards, at the age of 57, he met the principal clarinettist of Germany’s Meiningen Court Orchestra, Richard Mühlfeld. Mühlfeld’s artistry impressed him so much that he composed four major works for him between 1891 and 1894: the Trio op.114 (with cello and piano), the Quintet op.115 (with string quartet) and the two piano-accompanied sonatas op.120.

Doubtless with an eye to increasing sales, all these were published with a viola version as an alternative to the clarinet. In the Trio and Quintet both parts are almost identical, but in the sonatas there are octave changes, added double-stops and rewritten passagework. The arrangements were apparently made by a staff copyist and corrected by Brahms (the viola manuscript is at the Brahms Archive in Hamburg), but the composer was never completely happy. In a letter to Joseph Joachim, he laments that the sonatas sound ‘clumsy and unsatisfying’ on the viola.

Viola players should look closely at the clarinet versions and decide whether to keep to the composer-sanctioned viola arrangements or go back to the clarinet originals. Many changes were probably made to spare the violist from playing in high positions for long stretches, but they distort the thematic material and alter the interplay between the viola and the piano. With today’s technical standards, there is no reason for perpetuating those concessions.

Throughout the sonatas I keep mainly to the higher pitch of the clarinet versions. One exception is at the beginning of the F minor Sonata, where the first phrase has its own logic and works well at both the higher and the lower octaves. I wouldn’t willingly give up the warm, dark sound of the viola’s G and C strings here (example 1). A characteristic of both sonatas is Brahms’s use of wide intervals in legato phrases, and this must be brought out; the listener should feel the distance. I am strictly against a ‘safety first’, one-position fingering. Allow the music to ebb away at the end of the phrase in bar 16. I switch to the clarinet version for the passage starting in bar 26.

Here it’s not just a matter of choosing which octave to play in: as shown in example 2, the actual notes in bars 29 and 30 were changed in the viola part for no apparent reason, and not for the better. In their original form the arpeggios end on the same note as the piano, which plays an embellished form of the main theme. The final crotchet of each arpeggio in the viola part (as with the clarinet) falls under a slur, with a staccato dot – analogous to the crotchet in the piano tune. This should be the softest note, so don’t accentuate it. I play the broken 5th in bar 40 across the strings and, for contrast, its repetition two bars later on the D string with an expressive portamento (example 3). I stay on the D string until the first beat of bar 46, in order to save the brighter colour of the A string for the new motif, marked dolce. 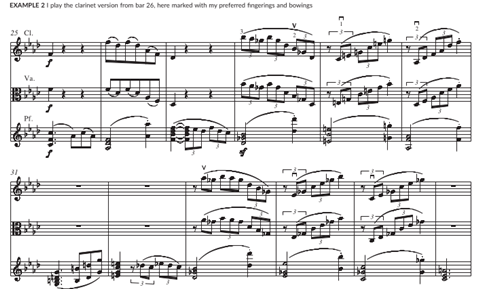 Often one hears the crotchets on the down-beat of bars 49 and 51 slurred to the preceding quavers, but I see no reason to change Brahms’s meticulous phrasing. Accentuate the down-beat in the new motif starting at bar 53, marked ben marcato. Be sure to observe the semiquaver rest, and adjust the bowing so that the lowest note of the arpeggios in bars 62, 64 and 66 comes on a down bow. This helps it to be heard in spite of the lower register (example 4).

From bar 68 there begins a canon between piano and viola that must be brought out clearly. Conclude the phrase in bars 71 and 72 without adjusting your dynamic to the piano’s accents. In the corresponding passage of the recapitulation from bar 184, start the phrase at the original high pitch – D flat3 – to avoid breaking the descending line at bar 189. This change of octave is the kind of thing that prompted Brahms to proclaim the viola version of op.120 ‘unsatisfying’!

But there is one change that I find very convincing: the clarinet has a crotchet C2 on the first beat of bar 94, which in the viola part was replaced by a crotchet rest (example 5). It isn’t certain whose idea this was – Brahms’s or the copyist’s – but I find the rest more satisfactory because it increases suspense before the impending key change. I play this passage at the higher octave, with a portamento up the A string in bar 92; for the pianissimo repetition I play across the strings.

Similarly, I break the slur in bars 102–3 but play the subsequent pianissimo in one bow and on the D string, to maximise the contrast in colour. I stay on the D string for the next passage, which I start mezzo piano to give leeway for a long diminuendo. Another frustrating change can be found in the passage from bar 125: the build-up collapses when its concluding phrases are taken down an octave. I keep to the clarinet part here, as I do for the embellished beginning of the recapitulation (example 6): the last quavers of bars 139 (A flat) and 141 (D flat) are thematically crucial, but the viola version omits them.

Similarly, the build-up from bar 195 should be allowed its climax by playing bars 199 and 200 an octave up. I underline the lightening up into F major in bar 207 by sliding up to the A natural on the C string. For the lead into the coda (example 7) I again choose the clarinet version in bars 214–220 (both versions are identical from there on). Enjoy the high C in bar 216 with a heartfelt portamento. Play the last phrase of all on the D string with the slightest of fermatas on the dotted crotchet in bar 231, followed by the three quavers a tempo.

The main motif of the second movement comes five times, and we must find five varying ways to shape it. Play the first, marked poco forte, on the A string; then you can do the dolce repetition on the D string. The two connecting bars also come twice in the movement: first in bars 11–12 (example 8) and again in bars 59–60. Use different fingerings to give contrast: play once with a portamento and once staying in position, with the first note stopped or as a harmonic. 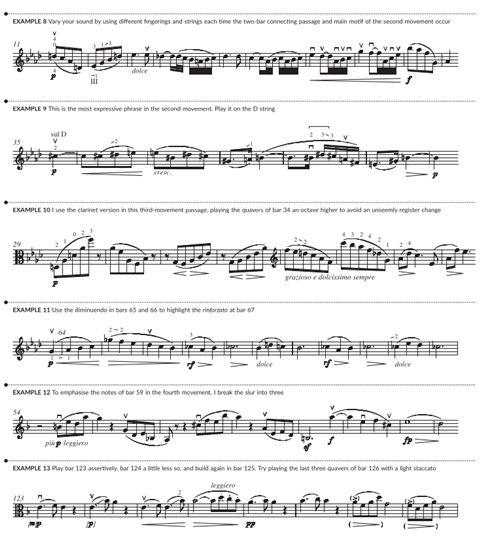 For the demi semiquavers in bars 17–18 and elsewhere, the separate notes should sound like legato.Use an open sound in first position for the dotted motif in bar 24, then play its repetition in bar 26 almost non-espressivo. I recommend a change of string between bars 28 and 29 to emphasise the subito piano at the end of the crescendo. In bar 30 I do a portamento between the E and the F sharp to emphasise this phrase’s special quality; I break the slurs in bars 31–32, then play the two following pianissimo bars with one bow for each. The phrase starting in bar 35 is the most intensely expressive in the whole movement (example 9), and I play it on the D string.

When the main theme returns in the lower octave in bar 49, marked piano espressivo, play mezzo piano or even mezzo forte and enjoy your viola’s full, dark sound. Resist crescendoing into bar 58: the phrase continues in the piano, so there is no need. In bar 72, the viola stays in pianissimo although the piano crescendos; the pianist must be careful. Play the last phrase as softly as you dare.

I like the third movement to follow almost attacca: the last note of the Andante fades away and rises again as the up-beat of the Allegretto. This up-beat can be stretched a little to give the sound time to grow. The whole movement has to be both boorish and elegant; the pianist must be discreet. Be sure to make a difference between the accents in bars 3–4 (on the second beat) and those in bars 7–8 (on the first beat); respect the slur in bar 23, which is all too often broken for ease of bowing. To break it nullifies the difference between this bar and the next, in which the third beat functions as an up-beat.In bar 29 the viola version has a new melodic shape. I can’t see the reason for this and prefer the clarinet line (example 10). Play the quavers starting in bar 34 an octave higher to avoid the yodel-like change of register in bar 35, then give the dotted crotchets in bars 41–42 a nice lilt. Think of the dotted minims (d) from bar 47 as bell strokes: don’t play them tenuto but let each of them fade away.

Later on, make sure that both you and the pianist observe the diminuendos in bars 65 and 66 (example 11), in order to highlight the rinforzato of bar 67 better. Differentiate between stronger pairs of bars (67–68 and 71–72) and dolce bars (69–70 and 73–74); play the latter pianissimo, then build up from bar 75. Even if you break the longer slur in bars 79–80, make the two bars sound as one, separate from the one-bar slurs before and after.

I play the opening fanfares in bars 4–7 an octave higher than written for viola, to prepare better for the main theme in bar 8. Beware the unexpected accent on the fourth beat of bar 11. In bar 28, crescendo so that the piano doesn’t cover you. In my experience few pianists can play the second subject with a real legato. It helps to take it slightly slower both times it appears, so I prepare it with a little ritenuto in bar 41. Play the big tune from bar 46 on the A string, underlining the expressiveness of the diminished intervals.

Speed up unobtrusively in the two bars preceding the leggiero figure that starts in bar 54, which should be in the original tempo (example 12). Be sure to distinguish whether the figure ends with a light quaver or a crotchet that leads on to the sforzato climax of the phrase. I break the slur in bar 59 for maximum emphasis. It can be nice to play the accompanying figure in bars 109–110 across three strings. In the lead-in to the third subject (example 13), I play bar 123 assertively, bar 124 lightly with portamento, and bar 125 strongly again.

Walter Trampler, with whom I studied in New York, used to play the last three quavers that lead into the theme (bar 126) with a light staccato, which I rather like. Be careful to stress the down-beats of bars 129 and 130, following each with a lighter minim on the second half of each bar. In bar 138 I do a portamento up to the D, to underline the harmonic tension. Adopt the piano’s dynamic markings in bars 150–154, alternating crescendo and diminuendo. In bars 184–187 play a solid martelé on the string. The quaver in the dotted rhythm of bars 211–212 should feel like an up-beat, as the phrase continues in the piano. I play the last two arpeggios in first position, shifting up for the final note of each. If in the mood, one could add chords to the penultimate bar.