In this article from the May 1997 issue, Michael Freyhan examines how Brahms was one of the first composers to appreciate the viola’s potential, giving the instrument a chance to shine through his chamber music 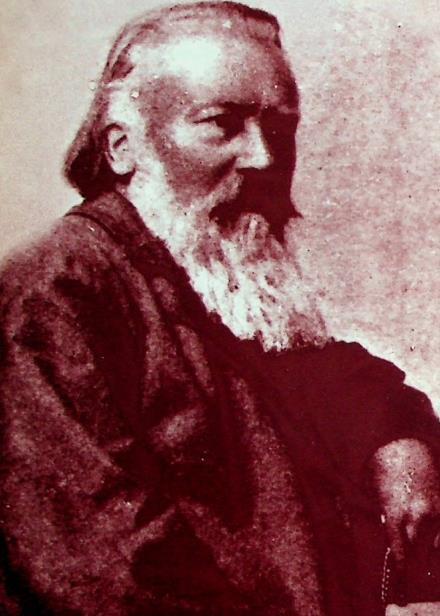 As we celebrate Brahms in his centenary year, this may be a good moment to investigate the special relationship between the warmth of his music and the natural richness and sonority of the viola. As early as his mid-20s Brahms had made an expression of faith in the instrument, writing his Serenade no.2 in A major op.16 entirely without violins, which left the viola exposed. He did likewise in the sombre opening movement of the German Requiem, which was started even earlier, though the work took more than a decade to complete.

But it is in his chamber music that the viola is used to best advantage, not least in the two sextets and quintets, where the instrument is represented not once, but twice. The case for the viola is just as powerfully argued in the string and piano quartets, where it shines through not ony as a melody instrument, but in the imaginative inner parts which so enliven the timbre and character of his scores. I haven’t yet mentioned the two sonatas. They are a special case and will be considered later. Suffice it to say that they represent the most substantial contribution of any of the great 19th-century composers to the viola sonata.

Let us start by looking at the viola from the viewpoint of Brahms’s immediate predecessors and contemporaries. Berlioz, in his Grand Traite d’ Instrumentation famously describes viola players as ‘among the refuse of violinists’. Consequently they know neither how to play the violin nor the viola’. In mitigation, however, he also states: ‘Of all the instillments in the orchestra the one whose excellent qualities have been longest misappreciated is the viola. It is no less agile than the violin, the sound of its strings is peculiarly telling… and its quality of tone altogether of a profound melancholy.’ Noting that the upper register has ’a marvellous beauty in scenes of a religious and antique character.

Berlioz berates the French orchestras of his day for tolerating weak instruments which ‘have neither the size, nor consequently the strength of tone of veritable violas - being almost violins strung with viola’strings’. Wagner makes a similar point about the weakness of not only viola but also violin sound when writing in support of a new kind of viola, the viola alta, designed for increased resonance by Hermann Ritter, a German viola player.

’The free A-string sound of this bright, well-sounding instrument, which is no longer thin and nasal, will be able to take over vigorous melodic material from the restricted A-string sound of the violin, which is so weak in this register that Weber, for example, frequently had to double it with a wind instrument (clarinet or oboe etc). This won’t be necessary any more, thanks to the viola alta, and will allow the composer to stick to his intention of using pure string timbre rather than mixed colours.’ In this letter printed in the Allgemeine Musikalische Zeitung (AMZ) of 10 May 1876, Wagner welcomes the prospect of the viola alta’s introduction into the Bayreuth Orchestra. The body of the instrument was 50% longer than that of the violin, however, which probably accounts for its early demise.

Brahms seems not to have shared the common view that the viola was a disadvantaged instrument. In fact, when he explored its full potential he was criticised for misunderstanding its natural role: ’The use of the viola is especially noticeable, since, to fill out the harmony, it is often occupied with double-stoppings which are at times very uncomfortable, and elsewhere has to play passages in high positions, against its nature; we can hardly quote a place where this instrument has a more independent role, in keeping with its particular sonority’ (review of the Piano Quartet no.1 in G minor op.25, AMZ 15 March 1865). But a few years later, when Brahms played the piano part with the Hellmesberger Quartet at a concert in Vienna, the review was quite rapturous: ‘Brahms is so clear in his interpretation and so inspires and dominates all the performers that a work, especially one composed by him, invariably makes the greatest possible impression’ (AMZ 18 December 1872). 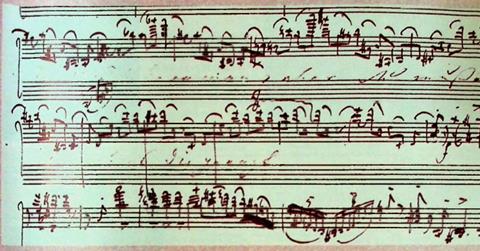 The challenges of Brahms’s Violin Concerto (above, showing Joachim’s annotations were designed for Joachim, whose large hands also enabled him to play the viola with ease. 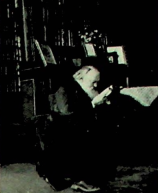 It would be hard to overestimate the importance for Brahms’s string compositions or his friendship with Joseph Joachim. Joachim’s advice extended beyond the mere technicalities of string writing, as is demonstrated in his letter to Brahms of 7 April 1863: ‘I hope that you will change some of the rough edges here and there that are too much even for me, and lighten the colouring in places.’ To which Brahms replied (13 April 1863): ’Please would you therefore return my quintet to me. I would much prefer, if I get round to it, to hear it without rough edges, if possible.’

The work was the F minor Piano Quintet op.34, not yet in its final form but still in the original string quintet version. Joachim wrote back immediately (15 April 1863): ’I am reluctant to let the quintet out of my hands without having played it to you. It would be the best, the only way to be helpful to you… It is a lack of seductive sound which approximately describes why I cannot enjoy it without reservation. And I think that you would feel this too, given time and a chance to listen to it quietly.’

It is a surprising view, but then no one today has heard this early and now lost version of the work, although a reconstruction has recently been made by the pianist Tony Gray. Perhaps Brahms destroyed the manuscript, having successfully rescored the music in two different ways, as a two-piano sonata and as a piano quintet.

In 1878 Brahms wrote out the solo part of the Violin Concerto, on which he was then working, and asked Joachim to assess it. Below the passage commencing as shown in example 1, Joachim has written: ’to be sorted out, but you must hear whether it satisfies you.’ The section with double-stopping in tenths (see example 2) is described as ’difficult for those who, unlike me, don’t have a  large hand’. (Slurs and accidentals are given here as in Brahms’s autograph of the violin part). 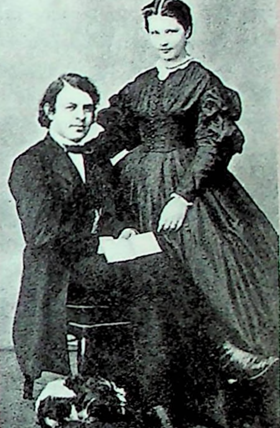 It was for Joachim and his wife, the mezzo-soprano Amalie Weiss (right), that Brahms wrote his two songs with viola obbligato

But to return to the viola, let us now consider the two viola sonatas op. 120 written, of course, originally for clarinet. It is through the correspondence with Joachim that we discover the background to the viola version. Brahms to Joachim (14 October 1894): ’Should you be coining to Frankfurt… please let me know. I would come too, and either invite Mühlfeld or bring a viola part for two clarinet sonatas which I should very much like Frau Schumann to hear. Our cosiness would not be disturbed by these unassuming pieces - but it would be nice!’ Joachim replied by return: ’I will be in Frankfurt on 9 November… Please write soon whether I may really look forward to it. It is quite splendid that Mühlfeld has inspired you to further chamber music.’

Richard Mühlfeld was a clarinettist whom Brahms first heard in Meiningen in 1891. Having vowed to write nothing more after the G major String Quintet op.111, Brahms was moved to break his self-imposed retirement with a series of magnificent chamber music works featuring the clarinet - a trio, a quintet and finally these two sonatas. The sonatas are just as much a gift for viola players however, and many insist that the radiant warmth of the viola is even more appropriate to the music than the ‘cool , liquid timbre of the clarinet.’ Unfortunately, this opinion was not shared by Brahms, as we learn from his reply to Joachim (17 October 1894): ‘That’s excellent… I hope Mühlfeld will be able to come — for I fear that the two pieces are very clumsy and ungratifying [sehr ungeschickt und unerfreulich] as viola sonatas’.

It is a harsh judgement. Was Brahms right? The restricted range of the viola certainly necessitated all sorts of rewriting of the wide-ranging clarinet line, often with unsatisfactory solutions. And so far as the change of timbre is concerned, Brahms’s next sentence leaves one in no doubt about his distaste for rearrangements of his music: ’It reminds me of the secret anger I experienced when you told me quite plainly and casually that you had played my clarinet quintet as a violin sonata. Why does one take the trouble to try to write judiciously?’ These sonatas were plainly considered by Brahms to be only ersatz viola music, but one must add a cautious rider that he had probably not yet heard them on the viola.

A little aside from the mainstream is a work written wholeheartedly and genuinely for the instrument. This is the two songs with viola obbligato op.91. Once again Joachim was the catalyst. On 13 April 1863, the year of Joachim’s marriage to the mezzo-soprano Amalie Weiss, Brahms wrote to him as follows, prefacing his remarks with a few bars of music (see example 3): ’At the proper time I will send you a wonderful old Catholic song for domestic use. You won’t find a better cradle song’. The text of the song, linking his friend with the biblical Joseph, reads: ‘Josef, my dear Josef, help me rock my little child. It was a touching gesture in anticipation of a future happy event’.

After a respectable 17 months, the moment arrived. Joachim to Brahms (early September 1864): ‘When do you go to Vienna? Please write and tell me, and before you leave send me from Baden the cradle song which you still owe me: I shall be needing it very soon’. But years passed and no cradle song was forthcoming. Worse still, the touching gesture proved an ill omen, for the marriage foundered. Brahms sided with Joachim’s wife, putting his friendship with Joachim under severe strain. An article by Artur Holde in the Musical Quarterly (vol.45, 1959) revealed hitherto suppressed passages in the published correspondence between Brahms and Joachim. It seems that Brahms wrote a letter of support to Joachim’s wife which was produced in court during the divorce proceedings. He explained his behaviour to Joachim in the following terms: I can never regret having written that letter. For me, it was a good deed, a release, to be able to say to your troubled wife the same thing that I had often enough said to you.

’The fact that my opinion was made public, that the letter was even produced in court, disconcerted me at the time. I make no judgement in the case, only give an opinion - and that is not a matter for the judge’ (30 October 1883). Brahms then offered reconciliation and the hand of friendship which, to his great joy, was accepted by Joachim. At last, after 20 years, came the right moment to complete the songs, in circumstances very’ different from the original intention. The poignant intimacy, the tender interweaving of voice and viola in an exquisite blend of depth and lightness, the sensitivity to colour in the combination of vocal and instrumental tessitura - here is viola writing arguably unsurpassed in the entire literature.

The bachelor Brahms sent the music off to the warring couple as a healing potion. It should have brought them together again - but I guess the art of marriage is even more complicated than the art of music.