The artistic directors of the string chamber orchestra, 12 Ensemble, explain how their conscientious approach to rehearsing chamber music has paid dividends when working with musicians from other artistic backgrounds 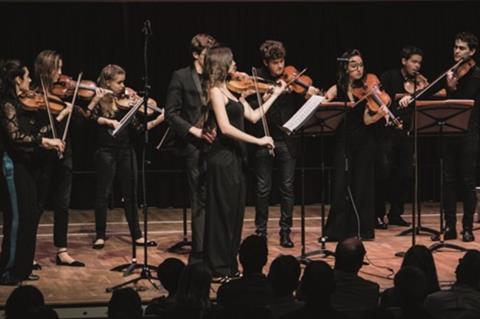 The following extract is from The Strad’s June issue feature profiling the 12 Ensemble. To read it in full, click here to subscribe and login. The June 2021 digital magazine and print edition are on sale now

’It’s interesting that whatever is good for classical soloists who are used to playing chamber music is also brilliant for them when working with more contemporary artists. It’s much more similar to the feel of a band than an orchestra,’ says 12 Ensemble’s co-artistic director, principal cello Max Ruisi. ’That’s what music should be about: people buzzing off each other and taking ideas and running with them. We really want to get across the fact that we are a group of twelve youngish musicians who are not just a band for hire with a load of people coming in every now and then. The soul and the core of the ensemble is in the personal connections that have been created over a long time. That’s why we started doing lots of work with pop musicians and for films: because people have noticed that working with us is very different from working with twelve strangers or twelve people who meet up every now and then for sessions.’

Read 12 Ensemble: In the driving seat

Eloisa-Fleur Thom, the group’s other artistic director and principal violin, remembers working with Marling, whose introverted songs sounded all the more poignant at a bittersweet time for so many musicians, Thom says ‘She’s so highly skilled in her artistry. And not having a conductor takes away a barrier that’s often there in collaborative projects when there’s quite a large string section or orchestra. With a conductor in charge, you are just following them. With that taken away, you have this amazing direct connection with the performer. In a way, all the skills that we’ve honed through chamber music we’ve ended up being able to bring to a different genre of music. I think that’s when we’ve found we’ve been able to create something special for our audiences because it’s spontaneous – following a singer like we would follow a violin soloist playing Mendelssohn’s Violin Concerto, or something that we know really well.’