What to do if your violin pegs keep slipping or sticking 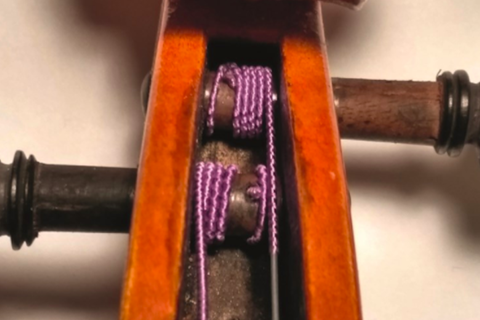 How the strings should look when re-tracked

The following is an extract from an article on instrument care for players in The Strad’s January 2021 issue. To read in full, click here to subscribe and login. The January 2021 digital magazine and print edition are on sale now.

Once players understand their pegs can be impacted by the way their strings are wound, they are better able to diagnose true problems with the pegs themselves. If your peg is slipping, and the string is wound on to it properly, then the next thing to check is the string hole in the peg itself. If that hole is too far over, to the point where it’s getting interference from the pegbox wall, the peg can’t hold. Understanding that the problem can’t be solved by shoving the peg harder into the pegbox can help you avoid frustration and possible damage to your equipment.

Drilling a new string hole in a peg is an easy fix for a luthier, and something you shouldn’t have to struggle with. Another reason for a peg to slip is that it might have worked itself so far across the pegbox that there isn’t enough usable shaft left on the peg. If the collar on a peg is essentially up against the outside of the box, there is nothing with enough thickness to keep the peg in place in the peghole.

Read: Geared pegs: why isn’t everyone using them?

If your pegs are sticking, and it’s not the way your strings are wound, applying a compound called ‘peg dope’ can be helpful. Often inexpensive instruments are not properly treated with peg dope initially as they should be, which makes turning the pegs more difficult. Simply remove the peg from the instrument and apply peg dope to the areas that contact with the pegbox.

If a peg has completely seized up due to humidity, it’s possible to wrap the head of the peg in leather and work the shaft loose with a pair of pliers. However, it can be easy to twist the head off the peg accidentally, so in most cases I would recommend you take it to a luthier.

Any other reasons your pegs are not working correctly most likely have to do with their fit, and they need to be adjusted by a luthier with the proper tools and knowledge. If you find yourself turning to solutions like chalk for slipping pegs, you’re better off in the long run having a professional check your pegs.