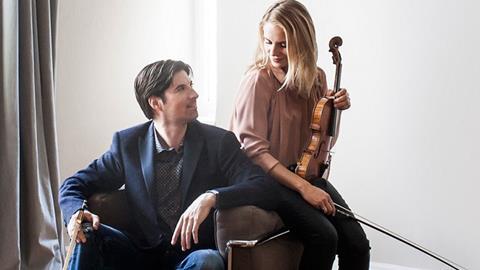 Julia Fischer and Daniel Müller-Schott describe the demands and rewards of their duo partnership in The Strad's October 2016 issue. Discover more Technique articles like this in The Strad Playing Hub

Julia Fischer Many people never learn the technique of how to play well in an orchestra, or how to play when they are standing in front of an orchestra as a soloist. It’s completely different from what you learn as a student. They are things that you can only understand by playing in or with an orchestra.

It’s the same with the Mendelssohn Octet: basically you’re always too loud, no matter what you do. You sit there playing second or third violin and think, ‘I’m hardly playing,’ but you’re still too loud. You have to develop that technique of playing from piano down to nothing in order to accompany well. It’s the same in an orchestra: everybody has to learn to accompany a soloist well. And as a soloist you have to learn how to play a soloistic piano in order to carry above the orchestra. But if the orchestra decides to kill the soloist, they always can.

Daniel Müller-Schott It’s true. Everybody wants to play loud and it’s probably a very natural thing, but learning how to play in a way that sounds soft and expressive but actually has an outcome that’s as loud as fortissimo, that’s fascinating – to be heard in the last row of a big hall, even when you are playing pianissimo. It’s a challenge.

Someone once told me that Rostropovich seemed to have such a big sound because he was so much aware of the orchestration and how to balance it that he always forced the conductor to make the orchestra players go down to almost nothing whenever the cello needed to play something soft. You have to develop these things, and to learn that if you play with an orchestra you also have to change your dynamic range, to give more. It’s exciting.