The history of the viola joke

Why pick on the poor violist? Martin Boyd searches for the origins of the viola joke 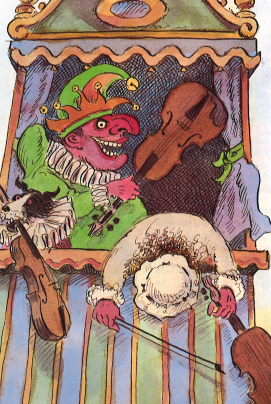 Every society has a butt for its jokes. The English have the Irish and the French have the Belgians. In the orchestral world, the unfortunate viola player provides the stereotype for numerous gibes.

The more masochistic viola players are keen tellers of viola jokes themselves. They write them down, collect them and even invent new ones so that they may be further taunted by their colleagues. I am fascinated by this. Most viola players that I know seem perfectly normal people (well, at least as normal as any other musician). Yet these jokes play on notions that viola players are in turn incompetent (Why are orchestral tea-breaks only 20 minutes long? Because if they were any longer the violas would have to retrain), neurotic (How do you get a viola player to play flying staccato? Write a semibreve with the word 'solo' beside it), and despised figures, the object of everyone else's sadistic impulses (How do you stop a viola player from drowning? Take your foot off his head!).

Since there is no smoke without fire, I did some historical research to see if I could find a reason for this prejudice and attempted to discover precursors to the viola joke.

It seems that musical prejudice is not a new phenomenon. Even in times before the viola had evolved there was a tendency to ridicule players of certain instruments. In that most musical of Shakespeare's comedies, Twelfth Night, the unfortunate Andrew Aguecheek, we are told, plays the 'Viol de Gamboys'; thus the instrument becomes part of his ridiculous image, emblematic of his laughable pomposity. Had the viola existed, no doubt Sir Andrew would have been an exponent.

If we believe the words of the composer Johann Joachim Quantz then the viola and violist were held in pretty low esteem in the 18th century. This is Quantz writing in 1752:

The viola is commonly regarded as of little importance in the musical establishment. The reason may well be that it is often played by persons who are either still beginners in the ensemble or have no particular gifts with which to distinguish themselves on the violin or that the instrument yields all too few advantages to its players, so that able people are not easily persuaded to take it up.

The writer of the entry in the New Grove Dictionary in which the quotation appears adds, 'From such stuff are splendid inferiority complexes born and bred in violists!' Too true, but at least some composers had a soft spot for the viola: Bach, Mozart and Beethoven were all occasional viola players, but it was Hector Berlioz in the 1830s who believed it was high time the viola was taken more seriously.

Berlioz believed the viola to be a beautiful and unduly neglected instrument, the 'Cinderella of the Orchestra', and he composed his Harold in ltaly for solo viola and orchestra to prove it. However, even here, the viola represents the protagonist of Byron's Poem 'Childe Harold's Pilgrimage' who, rather than possessing traditional heroic qualities, is something of a melancholy dreamer, out of touch with reality. Is the whole work just a highly elaborate 19th-century viola joke?

Paganini, having commissioned the piece, didn't see the funny side. When he saw the score he went off in a huff refusing to play it.

Apparently it is not even possible for a viola player to pick up a novel without being insulted. Here is E.M. Forster in A Passage to lndia:

Ronny had repressed his mother when she enquired after his viola; a viola was almost a demerit, and certainly not the sort of instrument mentioned in public.

Forster captures beautifully the sense that for Ronny, a man whose public image is so important, the mention of his viola playing is a humiliation, a reminder of a side of his personality that conflicts with his public personae as a respectable colonial administrator. It reminds me of another viola joke: 'What's the definition of a perfect gentleman? Someone who can play the viola but chooses not to.'

In Kingsley Amis's novel Lucky Jim, Professor Welch describes an amateur musical concert that goes horribly wrong. The cause? Yes, you've guessed it, an errant viola player: The full extent of the ensuing carnage is left to our imagination:

There was the most marvellous mix-up in the piece they did just before the interval. The young man playing the viola had the misfortune to turn over two pages at once, and the resulting confusion...my word...

So the viola joke has a rich heritage. But the subtlety of these examples puts into question the veracity of the violist's retort to incessant viola jokes:

'Why are viola jokes so simple? So that violinists can understand them.'