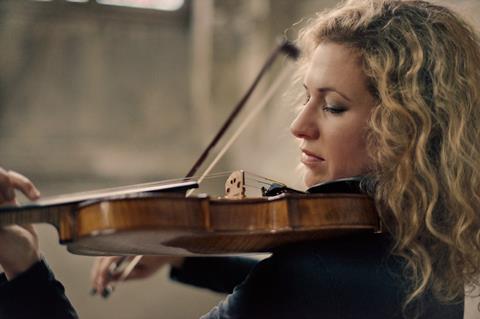 One of the most effective, distinctive, flamboyant, self-assured and, admittedly, short virtuoso pieces in the violin repertoire remains mostly unknown. The piece creates as glamourous an atmosphere as the composer might have been charming, and when played in recital amongst giants of the bravura repertory, maintains its integrity, walking coolly amongst the throng. Had the piece effectively been the woman it appears to describe, she would have had the allures of a diamond-clad diva. The work is entitled Tango – although it is more like a pastiche of all kinds of passionate dances.

The very first leap to a C high up on the G string in this Tango challenged me for weeks. It rivals the trickiness of that first ascending scale in Sarasate’s Zigeunerweisen and it fools the player with the seeming innocence of the F sharp to B jeté in the opening bars of Kreisler’s Caprice Viennois. ’I wonder if, like Sarasate or Kreisler, this composer was a violinist?’ I mumbled to myself as I reached for that C, swinging my left arm around the rib of the violin over and over again. This is not the kind of piece you begin a recital with. You need to have warm muscles to even attempt it with the nonchalance that it demands. Within the first 30 seconds, octaves on various strings in close succession, expressive melody lines, rapid, ascending scales, a bar squeezed to bursting with sixths and ricochet figures are all on show, revealing this work as equal parts brilliant and exacting. Like so many extraordinary encore pieces, it takes hours of practice to hone, but is over in three minutes when performed.

And yet, despite being outstanding, it remains: a piece for violin and piano that few have heard of, the composer a mononym mystery. The work is by Poldowski.

As it turns out ’Poldowski’ is the pen name of a woman of prominent heritage. She is Irena Regina Wieniawski, daughter of Henryk Wieniawski, niece of Henryk’s brother Józef, and daughter of Isabelle Wieniawski, who in turn, was the niece of Irish composer George Alexander Osborne.

The legacy of lineage is one that can be found throughout the history of violin repertoire and performance. Lineage can open doors, making opportunities available that may not have occurred had one not been born into a certain family, or taught by a certain teacher. Unlike her father’s abundant connections to great players and composers, through which a self-fulfilling prophecy of recognition, success and seemingly constant inspiration was achieved, Irena was not in such a position. Henryk died within the first year of her life and her skills as a composer and musician were honed by her assiduous pursuit of learning.

There are few professions where the impact of dynasty is as profound as in classical music. Whether knowledge is passed down through familial lineage or teaching tradition, oral history as well as written and recorded documentation are central to the continuation and development of our art form.

By extension, the creation of a school of violin-playing takes vision, a systematic approach, and ambassadors. Henryk Wieniawski, legendary violinist, composer and teacher, had great influence on shaping both performance style and technical prowess in his students, as well as composing the pieces with which we are familiar today. His relationship to the Franco-Belgian school is distinct. Wieniawski was third in line to teach at the Conservatoire Royal de Musique de Bruxelles, stepping into a distinguished lineage. Holders of the post had been the school’s founder Charles-Auguste de Bériot, then Henri Vieuxtemps and thereafter Wieniawski. Henryk Wieniawski was followed by his student Eugène Ysaÿe, and one of Ysaÿe’s most prominent students was, George Enescu.

Read: Playing the violin places constant strain on the body, yet we leave posture to chance

Poldowski’s educational background is not entirely clear – depending on which source you read, she was educated from a young age at the very same institution her father had taught. In other material, it reads that she was given a formal education only later in Paris. Piano was her instrument – all the more interesting when one considers her masterful compositions.

I decided to set about learning her works, and it quickly became clear that the Tango would be the one I focused on.

The first thing that struck me as I began to study the score was the frenzy with which the piano is given chords to strike the opening bars. On top of this comes a layer of G-string exclamation; staccatoed ascending notes that rise to a c′′′ (three ledger-lined C) that took me quite some time to navigate. The note is so unusually high that it requires a willingness in the player to traverse the topography of the space at the edge of the fingerboard. ’Willingness’ because, quite frankly, I’m averse to risking injury and without warming up and an understanding of what freedom of the movement of the left whole arm feels like, I think reaching that note, in tune and on command, is insuperable.

It’s not particularly encouraging to set out to learn a piece and be confronted with the impossible by bar three. I decided to step into a bit of positive thought, whistled the c′′′ while imagining what the note might feel like under my fingertip, and move on.

The precision of the left hand is a constant in this piece and by bar twelve, this precision is echoed in alla chitarra pizzicatti. But what proves to be the most difficult thing about the Tango are the continual demands on the violinist. There are constant changes of mood, ceaseless jumps from one string to another and rapid changes of stroke, from spiccato to legato, staccato to martelé. Another mark of the piece is the ease with which the bow is used at the frog. If one does not feel at home playing near the heel, there are a number of places that will prove arduous as they progress between bowed and plucked notes in quick succession. Changes of sonority, cantabile passages followed by indignant, short, percussive pitches require a very flexible right hand and arm.

The density with which Wienawski’s daughter defies the standards set by her father and dispatches a whole set of new challenges is quite stunning. Some might say that, not playing the violin herself, she had some daring to write such a gymnastic work-out of a piece.

It is only after practicing Tango for some time that it strikes me that the title of the piece may not solely refer to its style but is a reference to the contract the player goes into with the composer; the duo that the violinist forms with the pianist; and the story of a very impassioned dialogue between two people, or indeed the soliloquy of a solitary dancer in conversation with themselves. Perhaps the wrought conversation of Poldowski with herself?

Poldowski’s biographies describe in equal measure the frivolities of her social life and salons, as they do her life as an artist. Perhaps through highlighting her work here, her stellar Tango might take its rightful place amongst the legendary tapestry of perennial encore favourites instead of unjustly looking on from the sidelines of disregard.

’Legends’ is a collaborative project initiated by Gwendolyn Masin and the GAIA Music Festival in Switzerland, in partnership with Orchid Classics and SRF 2 Kultur. Born out of a wish to elevate Irene Wieniawski aka Poldowski, as well as draw a family tree of blood lines and student-teacher relationships, the recording includes works that have rarely been explored before. These include Poldowski’s Tango for Violin and Piano, Eugène Ysaÿe’s String Quintet as well as George Enescu’s Sept Chansons de Clement Marot. Artists featured on the album include Gwendolyn Masin, Kirill Troussov, Rachel Harnisch, and Jan Philip Schulze. More information can be found here: https://orchid-music.lnk.to/legends

Read: ‘It doesn’t have to be popular. It just has to be’: Gwendolyn Masin on honesty and art

Read: In focus: The ‘Wieniawski’ Stradivarius of 1719