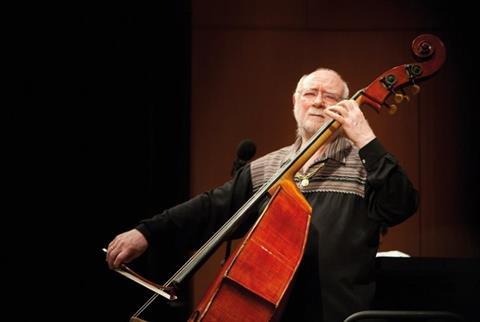 François Rabbath: ‘The Suites contain scales and arpeggios, but with so much more musicality’

When I started playing the double bass, I was always frustrated that there was so little classical repertoire written for it. I even began to compose some pieces myself, but I knew there must be some other way to find music to play. When I was around 17 I heard Pablo Casals playing the Prelude from Bach’s First Cello Suite on the radio, and I was overcome. It was the first time I’d heard the piece and it immediately gave me goosebumps – it was possibly the most moving performance I’d heard up until then. My first question was: why can’t we play this on the bass? A cellist friend of mine pointed out that Édouard Nanny had written some transcriptions for the bass in the 1920s, but I said I wanted to play them the way I’d heard Casals – in the same octave. ‘That’s crazy,’ he laughed. ‘It’s like jumping off the building and hoping you’ll land safely!’ He even bet his cello that I could never play the First Suite in its entirety. Well, to me that meant it would take time, so I started with the Prelude.

I quickly realised that the standard bass technique wasn’t enough to play the Suites. For one thing, you can’t slide up and down the fingerboard, as it sounds terrible. Instead I invented my own technique, in particular the ‘crab’ system of fingering, and using the left thumb as a pivot so that I could cover more of the fingerboard quickly (see Technique, October 2015). I also decided not to listen to any recordings – all I’d heard by then was Casals’ version of the Prelude – as I felt it important for me to find my own interpretation. While I was practising the Suites I could tell that my technique was improving and becoming more fluent in all kinds of repertoire. I also found they’re perfect works to practise – so many of them contain scales and arpeggios, but with so much more musicality. Just practising one of them for 20 minutes is like practising scales for two hours, because you’re not playing mechanically like a zombie!

It took a long time before I had all 36 movements ready for performance. The first time I performed them all together was in 1973, when I was 42 years old. I played the first three Suites at 6pm, and the last three at 8pm – a huge marathon that I’ve never attempted again! It was in the glorious space of the Sainte-Chapelle in Paris, and sadly it was never captured on tape. It was only in 2012 that I released them all on CD, and now, I’m pleased to say, a lot of double bassists play the Suites – it’s almost become part of the repertoire because the standard of playing has risen so high in the past few decades.

Nowadays I’ll even give my younger students passages from the Bach Suites to practise. It might be the first two lines of the Prelude, which I started with myself. I tell them to practise it for ten minutes each day and then go on to something else, and when they can play it, I’ll give them two lines from another movement. This is so that they can develop without being frustrated that they have to practise something they can’t do: if they feel like they’re constantly failing, they’ll stop paying attention and not improve. Most importantly, I feel like Bach taught me more about musicality than anyone – when I understood him, I found it easier to play Romantic music, opera and every other genre too.