‘Like day and night’: The Jubilee Quartet on two contrasting Schubert works 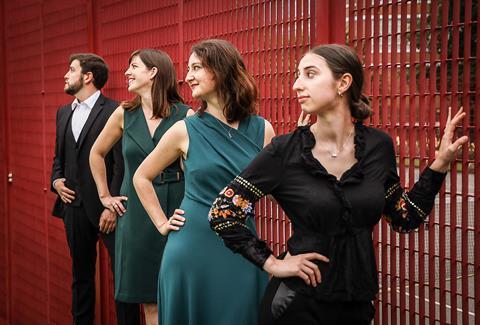 Schubert’s String Quartet no.10 in E flat major is considered youthful mostly because of Schubert’s development of his musical motifs. There is a beautiful simplicity and elegance to the work, but the degree of variation and harmonic progression that we find in Schubert’s later works is not yet evident here. He seems very happy to present a motive and allow it to exist in its own right, following traditional harmonic progressions and generally ’playing by the rules’.

Conversely, the G major quartet composed at the end of his life has a completely different vibe. The constant alternation between major and minor keys in the first movement, and indeed throughout the whole work, creates a strong feeling of unsettledness. As well as being technically challenging, the length of the piece and high technical demands could well represent the difficult journey Schubert found himself upon. In the last movement Schubert resorts to using all twelve tonalities, which we imagine no other composer can achieve with such smoothness. It provides a strong sensation of ’I am not done’, while knowing very well the end is near.

The G major quartet contains some of the most challenging writing in the string quartet repertoire. Many times individuals find themselves having to voice multiple lines simultaneously, and in turn this creates a very ambitious dynamic range and powerful textures. Pushing the instruments to their absolute limits like this was unlike anything else in the genre at the time. In contrast, the young Schubert is so pure and simple in his writing of the D87 quartet, almost flirting with the classic texture.

On pairing these two contrasting pieces, we in the Jubilee Quartet are fascinated with the role of rhetoric figures in Schubert’s work, and found these two pieces to be perfect examples of rhetoric built on harmony, melody, and phrase structure.

They offer a stark contrast when placed together, as they present the listener with all the extreme possibilities in Schubert’s world.  The last movement of the E flat quartet is almost Rossinian in its brilliant theatricality, whereas the G major quartet sets the ground as a grand opera without a text, making use of rhetorical figures that were nevertheless fading out of style at the beginning of the 18th century. These quartets are like day and night in the approach to the genre, and yet come from the same hand.

Read: ‘I was falling in love with chamber music all over again’ - Postcard from Napa Valley