2
How to help music students with sightreading
Playing Hub

How to help music students with sightreading

If your students only brush up their sightreading at exam time, they're missing out on an important part of music making, writes John Kember 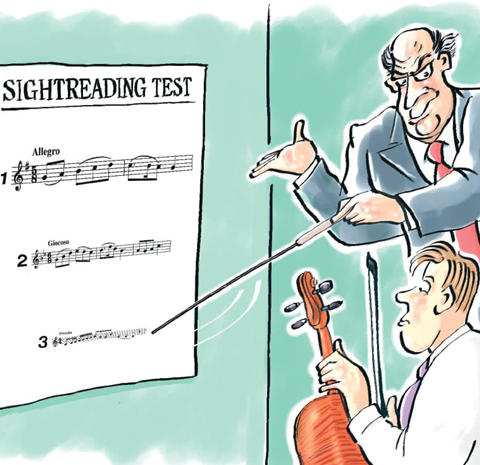 Sightreading is an essential life skill for all musicians and is far too important to be considered chiefly as an examination requirement. Only too often, however, it is put to one side until exams are imminent, leaving students not only unprepared for those tests, but also at a disadvantage when they take part in other musical activities.

As a past member of the Associated Board examiners’ panel I have been on the receiving end of poor sightreading from every instrument. Many potentially good performances resulted in disappointing exam marks due to a general lack of preparation and experience, which resulted in poor rhythm and irregular pulse, forgotten accidentals and a lack of shape and continuity.

Playing at sight can be learnt, but it takes time to develop and requires a clear study method. Often sightreading seems to get squeezed out of lesson time or left for the candidate to develop without any guidance. In response to this, I have been involved in putting together a series of sightreading books (Schott), including volumes for violin, viola and cello, which use progressive exercises to develop students’ sightreading skills.

I have encountered ‘natural’ sightreaders, but this ‘naturalness’ is generally the result of a hunger to play every available piece during the student’s formative years, and sightreading skills develop accordingly. For others some incentive or persuasion is necessary to be able to read to the same standard. Teachers can give hints, advice and guidance on how to sightread, but ultimately students have to do it for themselves – in a rehearsal, concert, audition or examination they are on their own.

The ability to scan a piece of music before playing, to recognise shape and patterns and to spot any potential pitfalls and difficulties – such as changes of clef, time signature, key, accidentals and rhythms – is at the core of successful sightreading.

Scanning should be encouraged right from the start of a student’s studies, as should observing performance directions, dynamics and the overall style of a piece to ensure a ‘musical’ performance.

Music used for sightreading should include repetition of rhythmic patterns, melodic shapes and sequences, to help the student to develop a repertoire of frequently found patterns: recognising the familiar rather than worrying about the unfamiliar is a considerable asset. It is advisable to proceed steadily from open strings, introducing one new technical point at a time.

As students become more experienced, they can move on to greater challenges, with less familiar keys, idioms, tonalities, clefs and time signatures.

One aim of music lessons in schools or music centres must surely be to enable students to take part in some form of ensemble playing, be it a chamber music group, a small string section or a larger orchestral ensemble. In any of these settings string players will be expected to read whatever is put in front of them, generally with little or no opportunity to study the music beforehand. Students learning privately are also likely to participate in similar group activities.

In order to train students for ensemble playing as well as solo performance, the sightreading of duets and accompanied pieces should be included at every stage of a musician’s development. In this way students are encouraged not only to keep going rather than to hesitate or correct their mistakes, but also to hold their line while something else is going on musically, be it another player in duets, or a piano accompaniment. Playing with other musicians also encourages good counting habits and maintenance of a regular pulse. A further bonus is that when they’re sightreading duets with a teacher, students are given a tone quality to emulate – and poor intonation becomes more apparent than it might when they’re playing on their own.

Read: 10 tips to improve your sightreading from Rachel Barton Pine and others

Read: Are masterclasses an essential part of a musician’s training?

Ideally, sightreading should be part of a student’s routine every time they take their instrument from its case, but too often teachers run out of time in a lesson and the sightreading gets left behind. If, along with technical work and pieces, one or two sightreading pieces are set for learning during the week, it only takes a very short time to hear the results at the next lesson. From the learner’s perspective, this may not take up too much of their practice time if the sightreading works are treated as ‘mini-pieces’ to be learnt in one week. While this approach entails more than the one-off playing of a new piece that students will be expected to give in exams, with a methodical approach they need only play the pieces as often as necessary to provide an accurate and musical performance in their next lesson. When approaching these mini-pieces they should remember the essentials of good sightreading:

Taking this lesson-by-lesson approach to sightreading should go some way to eliminating those ominous words: ‘Your exam date has come through – you’d better take a look at this sightreading book…’

John Kember is a composer and pedagogue based in London. He served as an ABRSM examiner for over 16 years

This article was first published in The Strad's September 2007 issue