How did David Oistrakh’s interpretations evolve over his lifetime? 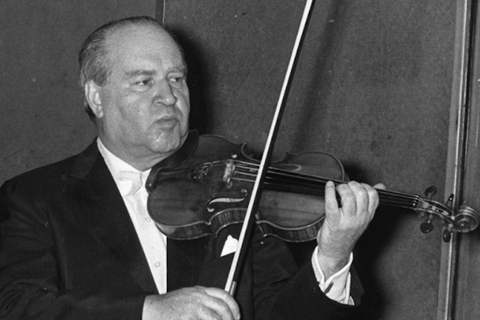 David Oistrakh’s recordings from the 1930s and early 1940s showcase his sweetness (Kreisler’s Liebesleid) and elegant brilliance (Sarasate’s Carmen Fantasy), and his humane radiance shines forth in Myaskovsky’s freshly composed Violin Concerto, which was dedicated to him. He never lost those qualities, of course, but as he navigated the turbulent waves of the Soviet Union, weightier, more profound and angular dimensions emerged. His wholehearted espousal of Prokofiev’s F minor Sonata (in particular), Bartók’s First Sonata, Ravel’s Sonata in G major and Hindemith’s and Stravinsky’s concertos formed the benchmarks of his artistic journey.

Most crucial was his close association with Shostakovich: while Oistrakh was at pains to avoid being an explicitly political artist, his role in the genesis of both concertos and the late sonata was surely telling. His interpretations of these works became increasingly visceral, his lyricism charged with urgent force rather than sorrowful resignation. In duo partnerships with Frida Bauer and Paul Badura-Skoda he achieved an ever deeper concentration of the musical discourse, while recitals with Sviatoslav Richter unleashed – in the Brahms D minor and Franck sonatas, and the aforementioned ones by Bartók, Prokofiev and Shostakovich – music making of staggering emotive impact