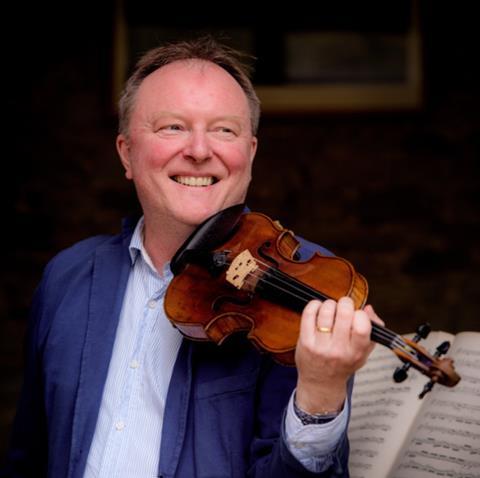 Sir Edward Elgar wrote this masterwork at his home of Brinkwells Cottage in Fittleworth, West Sussex, well regarded as a beautiful part of Sussex. The Violin Sonata, for which Elgar turned to the London Symphony Orchestra’s leader Billy Read to get technical advice on, is one of Elgar’s finest works, and reflects the beauty and nature that surrounded Elgar and abounds in the UK’s most wooded county.

The Sonata, described perfectly by Elgar as ‘full of golden sounds’, has been much recorded, though the accounts of the work by my two teachers and influencers, Lord Yehudi Menuhin and Hugh Bean CBE, are among the finest recordings out there. I particularly like the way in which the beautiful movements link into one with rich, stretching melodies, and I have always enjoyed colouring the beautiful sounds when playing the work on the Bernardi Music Group’s 1696 Stradivari violin. I very much enjoy the sense of unity which brings together the whole sonata as one, just as I enjoy the themes of another great inspiration: Elgar’s first symphony, which took me on tour to the Royal Festival Hall, and Brazil as a teenager.

This exciting final movement of the Concertino Pastorale shares my journey from where I grew up in Kent (Toccata was premiered at the Canterbury Festival in 1939) to Sussex. Like many composers, John Ireland was amongst the many to have been inspired by Sussex: John Ireland brilliantly captures the countryside in ‘Toccata’ and other works including ‘Amberley Wild Brooks’. The piece was written for the Boyd Neel Orchestra, whose entire library was kept safely in a Sussex barn throughout the Second World War. John Ireland rests in St Mary’s parish church where we worship, and which is also the spiritual centre of the Shipley Arts Festival as it was our first concert venue.

This movement has become a favourite amongst the community that we have gathered together as Festival Friends, and we have even recorded it live in the church. It is steeped in the culture of the area: the excitement of the fast notes is reminiscent of a well-controlled podium finish in a classic motor race nearby at Goodwood House in Sussex. Several of our supporters feel that exhilaration when hearing ‘Toccata’, in addition to appreciating the fact that the composer was inspired to write the piece by the very countryside we perform in.

Listen to a performance of ’Toccata’ by the Bernardi Music Group, recorded at the resting place of John Ireland in Shipley Church, West Sussex:

Malcolm Singer’s Shipley Psalms was written not long after we acquired our 1696 Stradivari, now known as the ’Amici Bernardi’ Stradivari violin. The commission wonderfully reflects Bernstein’s Chichester Psalms, a work commissioned by the cathedral’s organist and into which Bernstein incorporated some of the iconic motifs from his much-loved West Side Story. Malcolm’s response work, which is written on a series of Hebrew texts, is poetic and reflective. Shipley Psalms beautifully mirrors Leonard Bernstein’s Psalms, and it is similarly written in the same county and commissioned by people and sponsors in the local community. If you get the chance, do listen carefully to the stunning counter tenor in the Bernardi Music Group’s world premiere performance by the Chapel Choir of Royal Holloway, directed by Rupert Gough:

Helen Ottaway’s ‘White Storks’ was commissioned by the Bernardi Music Group in lockdown to celebrate the rewilding of these fabulous birds which have been re-introduced for the first time since medieval times by Sir Charles and Lady Issy Burrell at Knepp Estate, the EU leader for Wilding. This beautiful piece musically illustrates the birds’ spiralling and gliding flight, and joyfully nods towards the recovery of our natural world while also capturing the fragile balance of our diverse environment. Helen illustrates the birds brilliantly: she captures the White Storks’ ‘bill clapping’ using a new violin technique, that of using the bow nut to delicately tap the violin bridge or chin rest.

The fragility of the environment and the beauty of the large-winged flight are also caught elsewhere in the bowing, with simple pulsating up and down bows in natural time with the movement of winged flight. Then, a sense of joy and positivity towards the future is suspended in the final section of ‘White Storks’. While ‘White Storks’ is undoubtedly exquisite in its sound and what it depicts, it’s also a vitally important piece displaying a type of interconnection with the very life that grows trees and connects people through the expression of music. You can get a sense of this in the performance and dance video below: it’s the closing section of ‘White Storks’ filmed at Knepp Castle for its socially distanced online premiere during the depths of lockdown. We’re also delighted that this uplifting piece will feature on our 2023 release, having been recorded a few weeks ago at Abbey Road Studio 2.

‘Knepp Piano Trio’ reflects the revival of the Turtle Dove at West Sussex’s Knepp Castle and is a new setting of Ralph Vaughan Williams’ 1924 folk medley for Turtle Doves. ‘Roddy’ brilliantly captures the sounds of the birds with cello and violin glissandi, contrasted by the tapping of the piano by the pianist. For me, accompanying lines of notes in the violin part are reminiscent of, and feel like an extension of, the daring effects used by Holst in ‘Neptune’.

Since 2000, we’ve supported and commissioned composers including Roderick Williams, Cecilia McDowall, Malcolm Singer, and Jon Lord amongst others, and through our commissions have reflected the great creative moments of the early part of the twentieth century in Sussex led by composers such as Vaughan Williams, George Butterworth, John Ireland and Sir Edward Elgar.

16 June is Sussex Day. Andrew will be performing music written and commissioned in Sussex on Friday 17 June at the Festival of Chichester with the Stradivarius Piano Trio. More information can be found here.