Violinist Boris Begelman’s new recording represents a small fraction of the hundreds of violin concertos Vivaldi wrote during his lifetime – but people miss the point when they assume the composer’s prolific output equates to works of lesser quality, he tells Tom Stewart 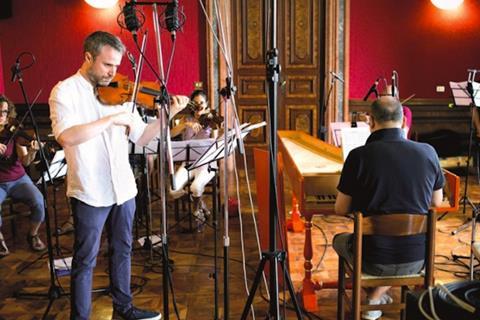 The following extract is from The Strad’s May issue session report on Boris Begelman’s new Vivaldi recording. To read it in full, click here to subscribe and login. The May 2021 digital magazine and print edition are on sale now

The ‘smaller’ concertos on the disc, RV194 in C major, RV281 in E minor and RV346 in A major, are reminders that Vivaldi was a practical musician in every sense, often writing music for his students at the Pio Ospedale della Pietà, the convent and boarding school where he was appointed maestro di violino in 1703. ‘The C major Concerto is full of fast jumps between the strings, so he obviously intended this as some kind of exercise for a student who needed to practise string-crossings,’ says Begelman. ‘And the beautiful E minor Concerto – E minor is a very special tonality for Vivaldi – has two completely different third movements. Someone who wasn’t so good at playing staccato appears to have asked him to take out some of the more difficult bow strokes, or perhaps that particular student needed to work on a different aspect of their technique, as Vivaldi replaced them with lots of double-stops.’ Whether it was these passages of didactic writing or something else in the composer’s pedagogical arsenal that did it, Vivaldi seems to have turned his students into capable teachers themselves. Perhaps spying an opportunity to cut costs, the Ospedale appears to have discontinued his teaching position in 1709.

There’s no doubt Vivaldi was a prolific composer (the violin concertos in the Turin collection represent less than half of those he is known to have written) but questions have been raised, time and again, over the quality of his work. For Begelman, modern criticism of Vivaldi’s abundant output tends to miss the point. ‘We have to go back to the 18th century and the way composers then lived and worked,’ he says. ‘The idea of a composer was not someone who spent years perfecting a single work. They were artisans – people who created things for a living, and they were expected to keep on creating. Some of his violin concertos are big pieces he obviously spent a lot of time on; others, less so. But it’s Vivaldi who turned the violin concerto into such an extraordinary genre. The huge, soloist-led concertos of the 19th century and beyond are all there in his music.’