9 tips for flexibility in the right hand

A look in The Strad archive for wisdom regarding the importance of flexibility in the bowing arm, hand and fingers 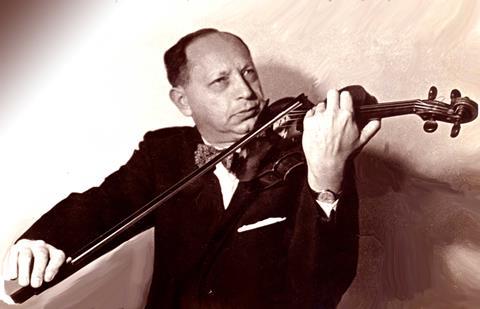 The right hand must receive the energy as it travels down the arm to the stick. I lean on the stick and align the energy to meet the tension of the string at the point of contact. I don’t squeeze or grab the bow, because holding it tightly inhibits the drawing motion. I use the thumb with the index and middle fingers of the right hand in a ‘cooperative venture’. Often I practise using only these two fingers and thumb – just to see if the energy is coming from the rib cage, over the shoulder blade, through the shoulder, down the arm, around the elbow, through the wrist to the fingers and connecting with the stick. I try to keep a good alignment in this energy passageway.

The most simple and beneficial way to develop the sensitivity of fingers is visualising and developing the feeling for every finger on the stick, especially the oft-neglected second and third ones. D.C. Dounis suggests an exercise: ‘Hold the bow with the stick in a vertical position. Then slither or climb with the fingers, like a snake, from the frog to the point of the bow and back again, very slowly and clingingly.’

The performance of a perfectmessa di voce – swelling and diminishing a long note – requires an interplay of tensions and relaxations that exists only in a perfectly balanced, dextrous technique. To master the messe di voce, then, is to conquer technique and coordinate yourself ideally at the instrument. The string, the bow stick and hair, and the player’s arm are all flexible and resilient. Together they create a system of springs that not only withstand pressure but thrive under it.

[A] very important issue for violinists and violists is the slope of the bow stick in relation to the bow hair. Often they push down so that the bow stick is tilted away from them and they are pressing on the far side of the bow hair, which often leads to a bad sound. By pushing down on this side of the bow, the stick falls closer to the string and the player is forced to reduce pressure to prevent the wood from contacting the string, so doing this can also lead to a significant loss in power.

Drawing the bow, I pull the string sideways as if it is a rubber band. I am not using arm muscle or clenching. Everything works in proportion: my fingers hold the bow, but the action is transmitted all the way from my back. My joints and shoulders are free and nothing is locked. The strong motivating force comes into the forearm and the heel of the hand, and the springs in my hand allow suction at the frog. I don’t use pressure or force the string – I coax the instrument.

One of the most frequent causes of problems in the right hand comes from placing too much of the pad of the thumb on the bow … if you place the pad of the fourth finger on the stick, the finger wants to straighten completely. Similarly, if the thumb is placed too much on the pad, it automatically straightens and becomes stiff. When it is placed on its tip, it naturally bends and retains its flexibility. There should be an imperceptible bending-and-straightening movement of the thumb in just about every bow stroke we play. If this flexibility is lost, the whole hand will lose its give.

‘Relaxed’ does not mean passive. The arm and fingers should be active at all times. Many bassists bow from the arm alone, but the shoulder blades should also be active, with weight coming from the back between them.

Using the back muscles and a relaxed arm with a pushing-pulling motion when bowing will give you more weight than you need, and helps you to stay flexible. If the bow arm is relaxed and you are using weight effectively and without pressing, you will feel your bass, strings and bow vibrate more freely.

Next, consider the fingers of the right hand. It’s easier to play fast passages when using a combination of arm, wrist and fingers. Using the arm alone is much harder, especially when playing a phrase with melodic continuity or string-crossings. By letting the thumb and index finger do most of the work, we can control the weight from the arm without much muscle force at all. The other three fingers mostly follow and support, but they also play an active role in articulation and the transfer of weight from the back and arm to the bow and strings.

Flexibility in the right hand and fingers, which you can maintain even when playing fortissimo or with a real accent or attack, is one of the secrets of tone production and mastery of the bow. A soft ‘springy’ right hand creates a sweet, warm tone, even when it is large. A ‘stiffer’ hand creates a smaller and harder-edged tone.

Even when you think that your bow hand is free of any tightness or blockage and that it is completely springy, there is always an extra degree of softness and buoyancy that you can achieve.

Galamian discusses bowing technique as ‘a system of springs’ that is partly artificial (the resilience of the bow hair and stick) and partly natural (the joints of the shoulder, elbow, wrist, fingers and thumb). His ideal bow hold allows the freest play of all the springs involved in terms of their interaction and coordination. His ‘natural’ bow grip stresses comfort and freedom, but is subject to constant modification according to the bow division employed, dynamic changes and the tonal quality desired.

Read: Independence and flexibility in the left-hand thumb