6 ways to develop a smooth legato 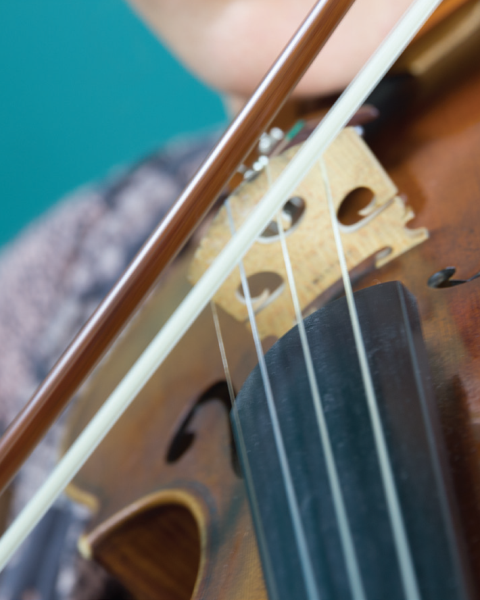 The pressure should only come from your hand and fingers, not your arm. The amount of pressure applied must be proportionate to your bow speed – herein lies the secret to creating a quality tone rather than a forced tone.

Try using a flat hair on the down bow to get a thicker tone. Draw with the fingers working closely together and the palm facing out. On the up bow, the stick is turned slightly and played at an angle.

When warming up, I play a full scale in a very slow tempo – one bow per note. I play each note for around five or six seconds, trying to play piano, without pressure, and concentrating on the equality of the sound of each note – there should be no sudden crescendos or diminuendos in any part of the bow.

I need to be able to make bow changes very smoothly: it allows me to make any sort of phrase I want by freely changing the bow up or down without feeling dependent on the bow changes.

The hold must be at once solid and secure while at the same time supple enough to permit fine and rapid adjustments. A most crucial action of the wrist and fingers occurs at the frog during the legato bow change. In this, the behaviour of the hand and fingers resembles that of the bristles of a paint brush in a side-to-side stroke.

Even as the arm begins to change direction (from up to down), the relaxed wrist allows the hand and fingers to lag behind so that, momentarily, they continue to draw the stick upward. Then almost immediately after the initiation of the down-stroke by the arm, the hand and fingers reverse and follow.

Listen to a legato piece of music you are familiar with (Saint-Saëns’ The Swan works well.) As you listen feel the expansion and contraction of the phrase in connection with that of your breathing, allowing your arms to float up and out as the musical tension builds and then to fall back to your sides as it releases. Thus, through the gentle amplification of the breathing, the seeds of bowing are sown.

Repeat the exercise but with your cello resting in the playing position. Observe any changes in your breathing pattern. The most common change for cellists is that they start breathing into the upper chest, cutting the breath off where the cello meets the body, as if the instrument replaces the body.

János Starker, with whom I studied, introduced me to his concept of the bow-arm action, which he refers to as the ‘basic legato rule’. Starting with a down bow at the frog, you draw the entire arm out in one motion until you reach the middle, when the forearm opens out as the bow continues to the tip.

On the up bow at the tip the forearm closes again and from the middle to the frog the entire arm works as a unit. Observe as the forearm opens on the down bow. In the second half of the bow the upper arm opens and rises, and consequently the bow stays straight to the tip. During the up bow the opposite takes place.

The difficulty is to secure absolute poise and balance in the control of long bows. I always practise half an hour daily on long bows, and, before giving a concert, I devote an hour to them for the space of a month: half an hour in the morning and half an hour in the afternoon. It is very monotonous to play them up the scale and down at the slowest possible tempo; but it is very rewarding. It is a wonderful refining process for tone, but must be kept up.

Leopold Auer pupil Thelma Given quoted in The Strad, October 2009