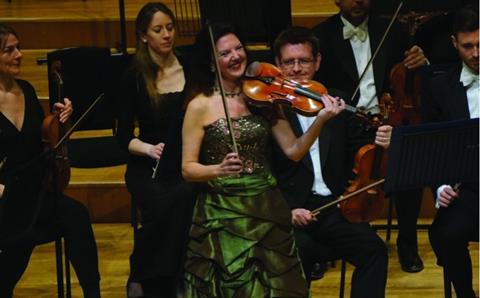 Tasmin Little: ’The Brahms Concerto has always felt ”right” to me since I was a girl’ © Andrew Rankin

Violinists are so lucky to have so much incredible repertoire. I play more than 60 concertos, but I always come back to the Brahms, which has always felt ‘right’ to me since I was a girl. There are moments such as the end of the first movement where, having made it through the cadenza, you emerge as if into a beautiful sunset at the end of a long and difficult day. Then the second movement has a lovely opening that allows you just to revel in the music. There’s so much in it, for both the soloist and the orchestra, that it would be impossible for me to feel there’s nothing more to discover about it.

I started learning the concerto when I was 19 and studying at the Guildhall School of Music & Drama. Final-year students have a chance to compete for the Gold Medal each year, so when my time came I decided the Brahms would be my piece for the final. I can still remember the opening, which is always hair-raising – you wait for ages for your first entry, and when it comes it’s the most difficult music. I can still never listen to it without my heart rate increasing! After that, though, I settled down and enjoyed it, and the adjudicator James Loughran remarked afterwards that anyone who could play the Brahms and smile at the same time had to have something going for them! Not only did I win the Gold Medal, but James invited me to make my professional debut with him conducting the Hallé in Manchester. So the Brahms became my introduction to life as a professional soloist as well.

I’ve performed the concerto 55 more times since then. Another memorable occasion was in 1994 when I was driving to Birmingham for a concert and my agent phoned me in a panic, saying, ‘The Royal Liverpool Philharmonic are in Hamburg and their soloist’s fallen ill; can you play the Brahms with them tomorrow?’ I agreed to do it, although it was the first time such a thing had happened to me – I felt like a member of the international jet set! We just had time for a rehearsal in Hamburg and then went straight out to play it. It was one of my most exciting performances.

I also performed the Brahms for my debut in America in 1997. Leonard Slatkin invited me to play with the Cleveland Orchestra at the Blossom Music Festival. It was in a stunning concert hall, with the audience partly indoors and partly outside, and Leonard was a fantastic partner, with so much technical expertise but also musical flexibility. I felt I was in the best possible company, especially as the orchestra members were so friendly towards me as well. Lots of them came up and said how thrilled they were to have me there.

But if I had to choose one performance that really stood out for me, it would be an open-air concert at the 2000 Aix-en-Provence Festival with Simon Rattle conducting the CBSO. I got the call in May for the performance in July and my schedule was already booked up – I only had time for a piano rehearsal with Simon, who always wants to rehearse to get the details right. Then for the concert, the French mistral wind had got up and the orchestral players had to peg their music to the stand; Simon’s score was blowing all over the place and he asked if I’d mind if he conducted it from memory. I said it was fine – I was more concerned about my bow being blown around – and it was one of the most incredible performances of my life. I felt free, like Simon was dancing on the end of my bow stick, and I was reacting to what he was doing. Even though these weren’t the most ideal circumstances, it was a performance that’s stayed with me always, and the one I’ll take to my grave.