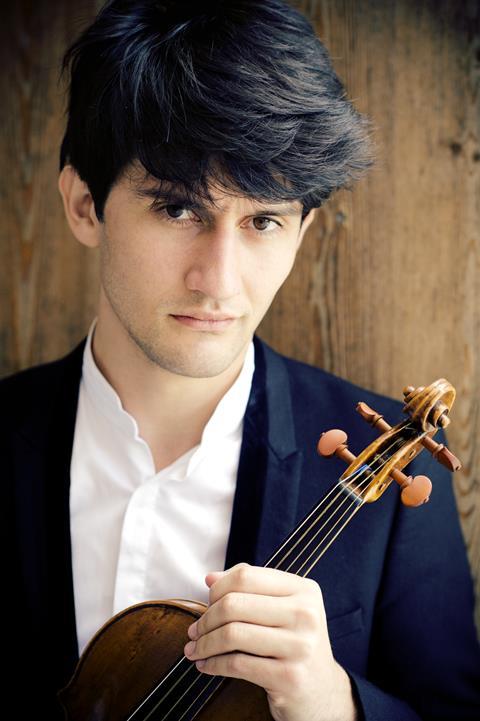 The following extract is from The Strad’s February 2022 issue  feature ‘Théotime Langlois de Swarte: Dramatic flair’. To read it in full, click here to subscribe and login. The February 2022 digital magazine and print edition are on sale now

It wasn’t all violin, though. Until the age of about 14, Langlois de Swarte was also singing in the choir his mother conducted, and this included lots of musical theatre. ‘From Oliver! to Peter Maxwell Davies’s The Two Fiddlers – and I always played the character roles. In The Two Fiddlers I was one of the trolls, which was really fun, and I think that part of the boy I was when I played a troll is still on stage with me now – because we are seen by the audience as well as heard. Music is not fake expression – you feel every expression that you play. But I think the way that you appear on the stage is really important.’

Aged 17, Langlois de Swarte entered the Paris Conservatoire to study modern violin in the class of Michaël Hentz. ‘He studied in St Petersburg and was mentored by Sergiu Celibidache, which was very interesting. I arrived with my technical baggage and my Baroque sound, whereas his Russian school perspective was the opposite of ideas in Baroque music – ideas of a small sound for chamber music at Versailles. Violinists always say that we imitate the voice, and with him I really worked on making a much bigger and thicker sound, building my vibrato, and this in turn extended my colours as a Baroque violinist.’

Lessons with Hentz occupied five, sometimes six, hours each week, encompassing quartet, duo, trio and solo playing, and all of it modern. ‘The concerto I played the most at the Paris Conservatoire was Shostakovich’s First!’ In the background, though, the Baroque was also bubbling away, and increasingly seriously. Most life-changingly, aged 18 he auditioned for Les Arts Florissants, and William Christie took a leap of faith.

‘He told me that following my audition the other members of Les Arts Florissants said, “He’s too much of a soloist to play in the group; he won’t fit,”’ explains Langlois de Swarte. ‘To which William responded, “Yeah, maybe, but we should try,” and I adore this way he has of working. When he has a choir, he wants the soloists to sing in it, but with their individual colour still standing out. Likewise, if someone in the second row of the second violins can be heard expressing themselves, he’s very happy because it adds to the collective expression. He doesn’t want to wipe out personalities. He’s not looking for homogeny, and it’s thanks to this attitude that I started with them, because at the beginning I was too soloistic. I played too loud, I didn’t fit. But bit by bit I learnt and in the process discovered a lot of repertoire.’

It was through Les Arts Florissants that Langlois de Swarte realised that, long term, he most wanted to express himself through Baroque music, with one particular performance of Mondonville’s Grands Motets proving to be an especially powerful experience. ‘I just fell in love,’ he remembers. ‘He’s not a famous French composer, but I thought his music was so great – so powerful. And I realised that this was what I really want to do in my life – to find forgotten composers, and to express myself through their music as if it were mine, written yesterday. One of the wonderful things about human beings is that we feel the same emotions as the people painted by Caravaggio, and I was looking at Caravaggio’s Boy with a Basket of Fruit, this Italian teenager, and thinking that perhaps he and I shared the same feeling: of the slightly uncertain future, the heightened emotions, the thought of needing to do something extraordinary. These thoughts made me want to play Mondonville, and to play with Les Arts Florissants.’

Christie kept inviting him back to play. Meanwhile, at the Paris Conservatoire, aged barely 20, Langlois de Swarte also founded his own period band, Le Consort, with harpsichordist Justin Taylor, violinist Sophie de Bardonnèche and viola da gamba player Louise Pierrard. ‘I had two identities,’ he says. ‘I played repertoire such as the Beethoven quartets all week on the modern violin; then at the weekend I played a trio sonata on my Baroque violin in a beautiful small church in another part of France.’