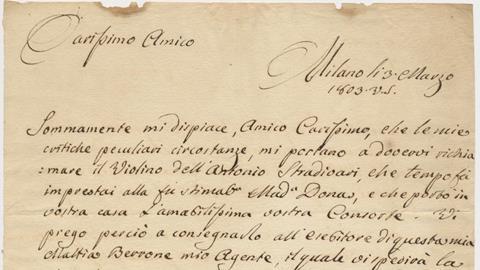 Dated 3 March 1803, the letter asks for the return of the influential collector's 1730 Stradivari and is addressed to a Madame Donas. At the foot of the letter is an added declaration from Mattia Berrone, Cozio’s agent, confirming the violin was safely received in a good condition on 13 July 1803.

The Italian Count Cozio was one of the first great connoisseurs of fine violins, amassing an extensive collection of Stradivaris, Guadagninis, Amatis and Bergonzis. He kept detailed records of his instruments, and his ‘Cozio Carteggio’ of notebooks has ensured that their early histories have been preserved to this day.

According to Tarisio, it is extremely rare for a letter by Count Cozio to be offered for sale - indeed, this is likely the first to be offered at auction. 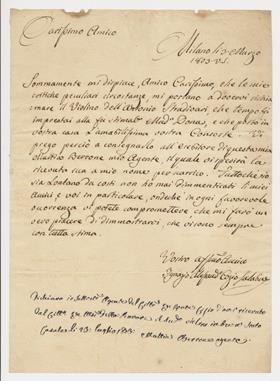