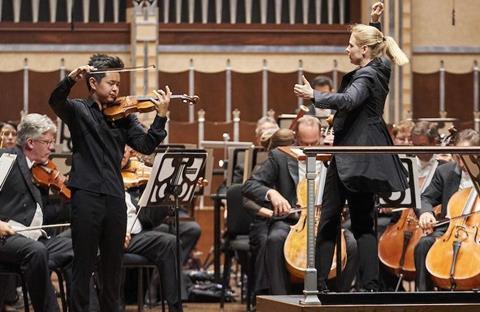 Eric Charles Chen, 18, was named the winner following his performance of the Prokofiev Violin Concerto no.2.

In second place came Shihan Wang, 14, from China with his peformance of the Mendelssohn Concerto, following by Isabella Brown,16, from the US, who played the Dvořák concerto.

Chen, born in Princeton New Jersey, began his violin studies at the age of three. At age eight, he became a student at the Juilliard School Precollege. He studies with Naoko Tanaka and Cho-liang Lin at The Juilliard Pre-college and is also under the mentorship of violinist Stefan Jackiw.

The Cooper International Competition, presented annually by the Oberlin Conservatory of Music and the Cleveland Orchestra, alternating between piano and violin, has a prize pot of $40,000, of which $20,000 goes to the winner, $10,000 to second place and $5,000 to third, with $1,500 each for fourth to sixth positions, plus a $500 audience prize.

The event began life as the Oberlin International Festival in 1985 and, after a brief hiatus, returned in 2010 sponsored by Thomas and Evon Cooper.