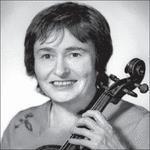 Violist Mildred Perlow has died at the age of 99. Born in 1922 in Newark, New Jersey, Perlow studied music at the University of Michigan before embarking on a playing career in New York and the East Coast of the US.

Perlow was fired from the New York Philharmonic Orchestra in 1946, not due to any issues with her playing, but because the Second World War was over and the returning servicemen wanted their orchestral jobs back. One of her prized possessions was the letter of dismissal, signed by Leonard Bernstein, which she kept throughout her life.

A longtime resident of Long Island, she paused playing professionally to raise a family, but later put together a series of professional quartets and played regularly in several Long Island orchestras. With a passion for string quartet literature, she played in several quartets over a span of five decades, including L’Amore di Musica, which she directed for 17 years.

Read: Opinion: Across the decades