Johan Dalene, Timothy Ridout and the Consone Quartet are among the scheme’s 2019 intake 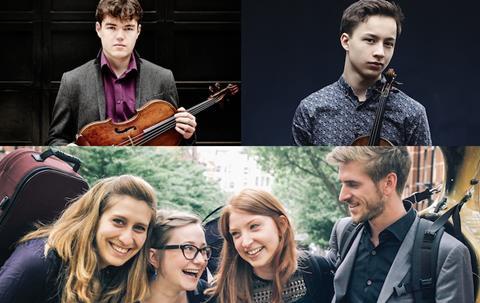 The BBC has announced the 2019 participants on its New Generation Artists scheme, a platform for emerging classical and jazz musicians run through Radio 3.

Among them are several high-profile string players, including the British violist Timothy Ridout and Swedish violinist Johan Dalene, as well the UK-based Consone Quartet.

The rest of the list comprises the British jazz guitarist Rob Luft, mezzo-soprano Ema Nikoslovska and two pianists: Eric Lu and Alexander Gadjiev, who hail from the USA and Slovenia/Italy respectively.

18-year-old Dalene, who, this March, was awarded First Prize in the Carl Nielsen International Violin Competition, is set to perform with all the major Scandinavian orchestras over the coming seasons, and to make his debut with both the Leipzig Gewandhaus Orchestra and New Japan Philharmonic. In Autumn 2019 he will release his first recording on BIS with the Norrköping Symphony Orchestra.

Formed at the Royal College of Music in 2012, it came to widespread attention after winning two prizes at the 2015 York Early Music International Young Artists Competition and scooping up the 2016 Royal Over-Seas League Ensemble Prize in London. The group’s debut CD, featuring music by Haydn and Mendelssohn, was released on the Ambronay Label in October 2018.

Among those who have benefited in the past are Alban Gerhardt, Lisa Batiashvili, Tai Murray, Veronika Eberle, Leonard Elschenbroich, Ilya Gringolts, Antoine Tamestit, Maxim Rysanov, Alina Ibragimova, and the Belcea, Ebene and Danish string quartets.